In Dallas, Texas a terrified Golden retriever was mauled by a pack of stray dogs at a rural trailer park. Residents from the mobile home development stated there was nothing they could do; everyone was afraid to get too close, and so they watched in horror as the gentle dog was nearly torn apart. When the crowd was finally able to ward off the attack and scare the dogs away, the injured retriever ran and hid underneath one of the mobile homes. Covered in blood and badly wounded, Goldie had no intentions of ever coming out. 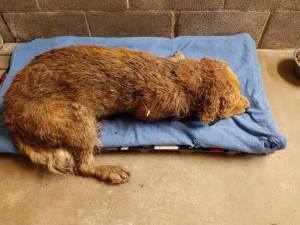 The helpless dog laid in shock until neighbors were finally able to get him out from underneath the trailer. Goldie was extremely weak and reeked of a rancid odor – the result of his multiple infected wounds. Brought to a local kill shelter, he never would have had a chance to survive without the help of animal advocate, Leslie Ysuhuaylas who called Rescue Dogs Rock NYC and asked if they would step up for the dog’s  survival and his emergency treatment. 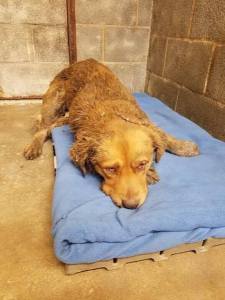 Goldie has been transferred to the organization’s partner veterinarian hospital in the  Dallas/Fort Worth area. Once Goldie is treated and his condition is stable, he will need an approved foster home. If interested, please contact Rescue Dogs Rock NYC here.

To donate to Goldie’s care, please click here or PayPal to Donate@rescuedogsrocknyc.

Photos and video  of Golden retriever courtesy of Leslie Ysuhuaylas and Rescue Dogs Rock NYC. It is not known who Goldie belonged to, but obviously his family didn’t care or was not financially able to help him. What we do know however is that Goldie will never be afraid again.