Audi, a two-year-old Labrador from Boise, Idaho, fell 30 feet down Dedication Point between Kuna and Swan Falls Dam on January 26, 2015, while she was out on a walk with her owner and needed the help of skilled rescue climbers to be hoisted out to safety. Thankfully, the Kuna Fire Department responded to the emergency call and helped Audi get back up on safe ground. 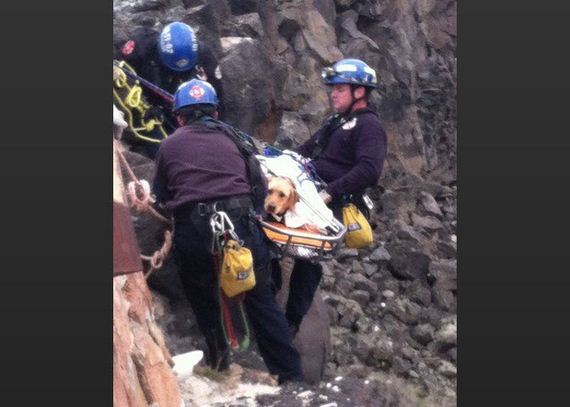 According to Magic Valley News the pet owner did not see the dog go over the jagged cliff wall and only became aware of the accident after another dog standing on a ledge kept looking down.

Kuna Fire Department Capt. T.J. Lawrence said the pet owner made a wise call when he reached out to authorities for help, if he had attempted rescuing the pet, firefighters would have had to rescue an injured dog and owner.

Hero rescuers used safety ropes to descend about 12 feet down the canyon wall and then walked about 100 yards to reach the dog. Fortunately, Audi did not suffer major injuries from the fall. She had no broken bones or internal bleeding, only some scrapes and cuts, low body temperature and some blood loss.

Firefighters placed and IV on the pet before hoisting her up to safety. Audi was reunited with her owner, transported to a veterinarian a for a thorough checkup and later released. The dog is expected to make a full recovery.