Three Puppies were stolen from Family Dog Rescue in San Francisco in an effort to make a profit. Taking two 8 week old Huskies and one Pit Bull Puppy, the thieves hoped to silently post them for sale in the surrounding area, and make it out without anyone ever catching on to their plan.

A burglar apparently broke a padlock at the front gate of the shelter, and made their way into the rescue in the middle of the night. During the robbery they stole the three puppies, some computer equipment, and some of the contents of the employees’ lockers.

“I’m sick, distraught and heartbroken. I can’t believe the world has come to this.”- Padilla, owner of the rescue.

In an effort to find the stolen pups, investigators knew they needed to explore every online sales outlet. They figured this was all about the money, and with avid searching, they would find their criminal. Investigations soon paid off when two puppies fitting the identity of the Huskies, were offered for sale online for $800 each. The good Samaritan that found the online sale agreed to participate in a sting operation, and pose as an interested buyer. 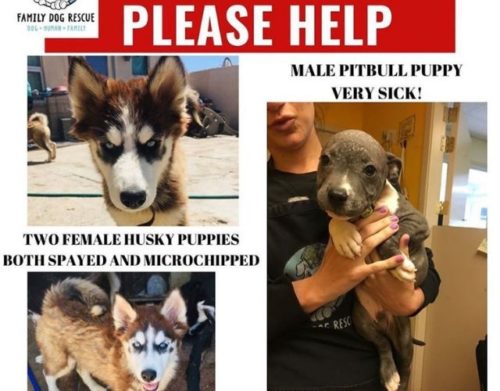 Working with the Hayward police, the good Samaritan agreed to meet at a local Starbucks for the sale. Once the thieves arrived, police swept in and arrested the two individuals, and brought the puppies to safety.

While the Family Dog Rescue was thrilled to have the two puppies back home safe and sound, their heart ached for the tiny Pit Bull puppy named Huey that was still missing. Huey is 2 months old, and was undergoing treatment for a severe skin condition before the theft. Those who loved him were so worried that he was not only missing his treatments, but that his condition could worsen in someone elses care. Being so young and compromised by his illness, they feared the worst.

In a stroke of luck, a pedestrian saw a tiny puppy all alone, roaming the streets in East Oakland. She immediately noticed the pups unfortunate skin and coat, and knew she needed to act fast. She quickly got in touch with the local animal shelter, who soon realized who this mystery pup was. The Family Dog Rescue immediately confirmed Huey’s identity, and rushed to reunite with their special boy! 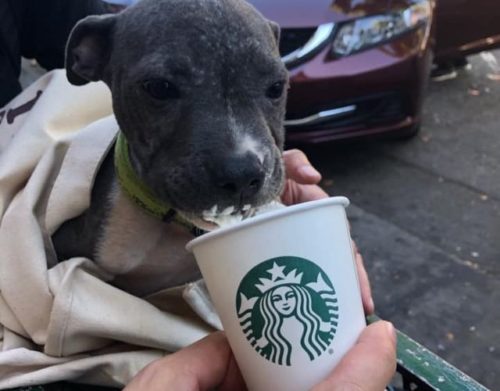 “We are so grateful to everyone in the Bay Area who helped us get our three puppies back. It truly takes a village!”- The Family Dog Rescue

We are thrilled to see that all three puppies have been reunited with the group of dedicated humans who worked so ensure their safe return!