When Stephanie Stafford pulled into her driveway, she knew immediately something wasn’t right. Her three dogs, Sheriff, Cal-e, Booker and foster dog Chance, were not bouncing off the window of the room they are kept in why she was at work like usual. There was no greeting at all. 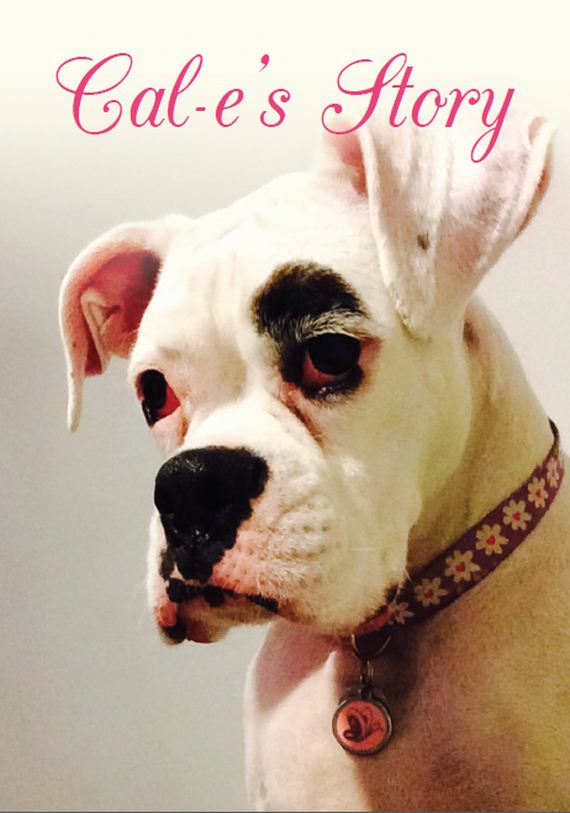 What happened next is a truly horrifying nightmare for any dog owner (warning: graphic story).

Stafford heard screaming the moment she got out of the car and rushed into her house. Sheriff and Chance were lying in a crate, fine. But nothing could prepare her for what she found next:

Cal-e and Booker were laying behind the door and Booker was struggling. What happened from there is a blur. They were connected and Booker’s mouth was under Cal-e’s collar. (THEY HAD BEEN PLAYING DURING THE DAY AND BOOKER’S MOUTH WAS CAUGHT UNDER HER COLLAR). I worked to disconnect Cal-e’s collar and at one point stood up to get scissors from the kitchen, but couldn’t manage to unlock the door with my keys.

I got back down to get Cal-e’s collar unhooked and then I unhooked Booker’s collar. This is when I realized Cal-e wasn’t alive. She had been strangled. I stood up screaming and turned back to do CPR. I got back down on the floor to realize that my dog daughter was cold, stiff, and long gone. She was lying in a pool of blood and urine. The floor was scratched up where she struggled for her life.

Covered in blood, Stafford finally managed to get Booker (who was injured) into the car along with Cal-e and rushed them to the vet.

Unfortunately, this is not the first or only story I have come across of dogs dying or receiving injuries due to their collars. I have also heard of dogs getting hung on fence posts after trying to jump a fence, or getting caught in a hole and being strangled or suffocating.

Yes, a collar can help your dog get home if he gets away. But it can also cause harm. 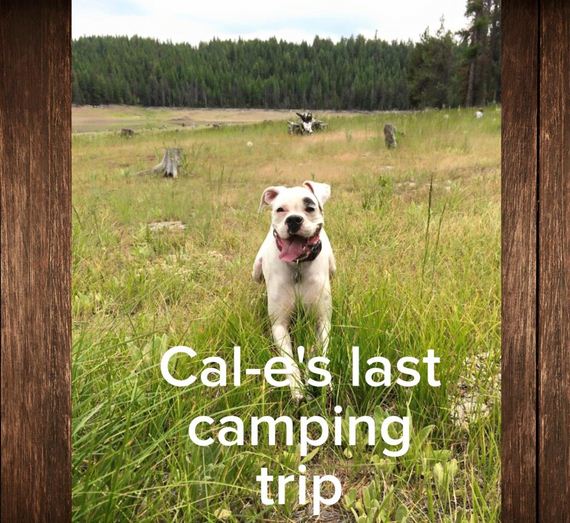 Stafford has a Facebook page dedicated to Cal-e’s memory and is using her own devastation and loss as a cautionary tale for others – she recommends your dog wear a breakaway collar. 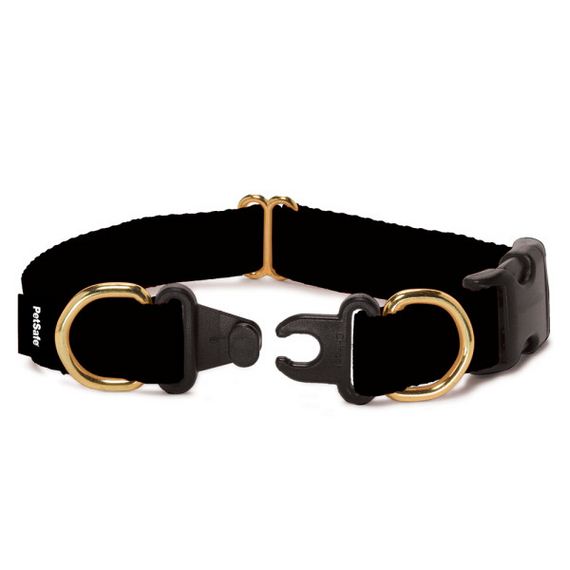 She believes Cal-e would still be alive if she had been wearing one that day.

The below image shows how easily a dog’s collar could get hung up on a fence post. Since this sweetie is wearing a breakaway, nothing bad will happen. If she was wearing a regular collar, however, she could easily be hung on the fence picket. 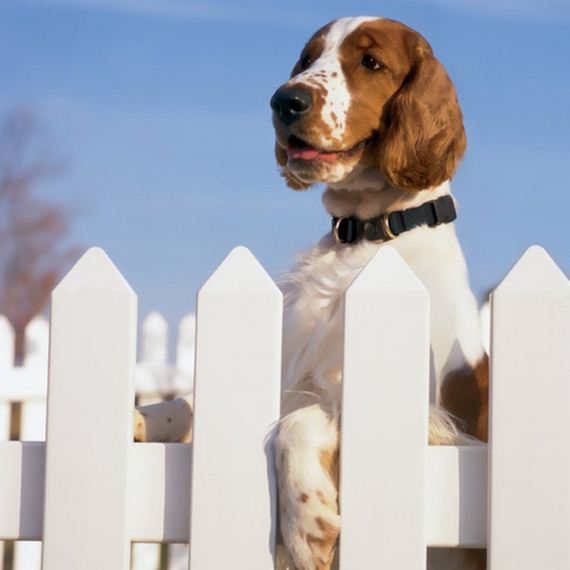 Even if you are not worried about your dog getting hung, strangled, or suffocated from his collar (maybe because he is always with you, or you don’t leave the collar on when you are not home), you should still be aware of other injuries that can occur with the use of a collar.

In a study performed by a University of Madison-Wisconsin veterinary ophthalmologist, Dr. Ellison Bently, they found that pulling on the collar (like during a walk) created an increase in intra-ocular pressure (IOP), which causes glaucoma. (www.veterinarynews.dvm360.com)

The study was sparked by a similar one conducted with humans that showed a correlation of tight neckties to IOP in humans.

The veterinarians saw an increase in IOP with just one minute of pulling. Obviously, there was some breed difference – breeds that are bred to pull, such as huskies, showed a lower increase over the time period. They believe this may have something to do with how the dogs pull.

The researchers believe that even small increases of IOP can have bad affects, including altering perfusion of the optic nerve and retina.

It’s important to know that they did not see a significant increase when a dog pulled with a harness, versus a collar. If your dog pulls, you may want to consider a harness (and training!)

(To see the full article on the study, click here). 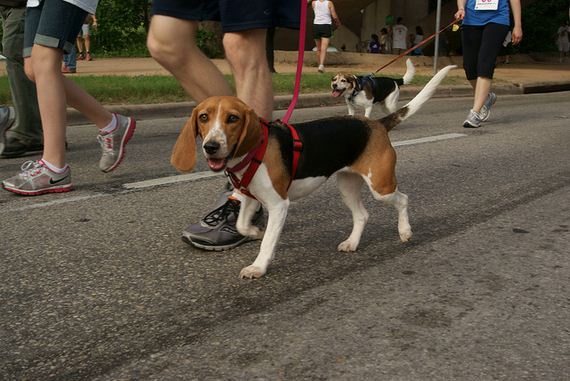 This one should seem obvious, but it’s rarely thought about when people are allowing their dogs to pull or are jerking on the leash themselves – but underneath that fur is a spine and it’s not indestructible!

Eri Suzaki, CCMT, is a Certified Canine Massage Therapist with Canine Therapeutics and she is against pulling on your dog’s neck.

As an expert on canine anatomy, she explains in a blog post what’s so important about that part of your dog’s body:

“Dogs have seven cervical vertebrae bones in the neck. In a hole in the center of each vertebra, the spinal cord passes through. The spinal cord is very important, as it carries messages from the brain to the rest of the body. The vertebrae act as protection for the very delicate spinal cord along with the intervertebral discs that work as buffer between each vertebrae.”

She has a nice image, reprinted with permission, which shows all that is holding up your dog’s head: 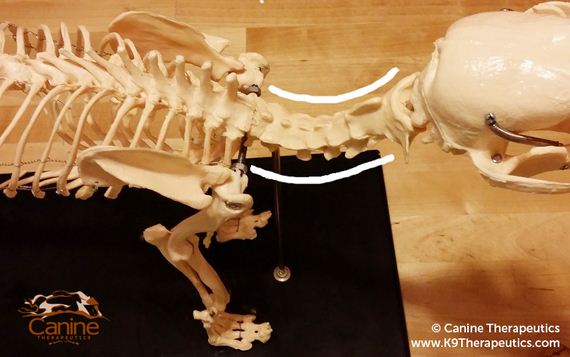 “As you can see in the skeletal model in the picture, dogs do not have any other bone to support their heavy heads besides the cervical vertebrae,” Suzaki says.

The spine is part of the Central Nervous System – the very important set of nerve tissues that controls the activities of the body. You do not want to damage this system.

A study performed in 1992 by A. Hallgren and found that 91% of dogs with cervical anomalies had experienced harsh jerking on the lead or had a long history of pulling on the lead. It should be noted that choke collars were overrepresented in this group. ( www.friendsofthedog.co.za)

The study concluded that leash corrections, a dog pulling constantly on lead, or a tethered pet hitting the end of a rope may  lead to spinal injury. (for more information go to www.friendsofthedog.co.za)

Of course, there is a variance from breed to breed, with some breeds more prone to neck injuries than others.

Dr. Kathryn Primm, DVM, owner of Applebrook Animal Hospital and the “Animal Stuff You Wonder About” blog, says that big dogs with heavy musculature in their neck seem less like to an issues, than small breeds with little muscle to “protect” the spine.

“Dobermans and Great Danes should not be [pulled/jerked] at all because they are predisposed to cervical instability,” Dr. Primm adds. 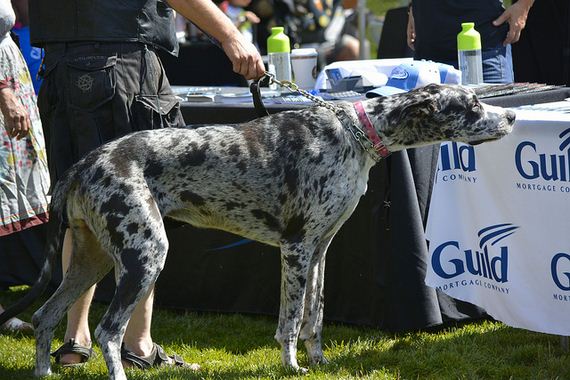 UC Davis has an entire fact sheet on Disc Disease in which they claim “The areas of the spine most commonly affected by herniated discs are the neck, and the mid- to lower back regions.” (www.vetmed.ucdavis.edu)

While they do not jump to this conclusion, it’s hard to not wonder if that it not due, in part if not entirely, to being pulled or pulling by the collar.

And of course, the muscles and ligaments also get overworked and strained, when the neck is constantly being pulled.

“When muscles are over-worked and stiff, there is no elasticity in the tissue so they are more likely to get injured.” Says Suzaki. 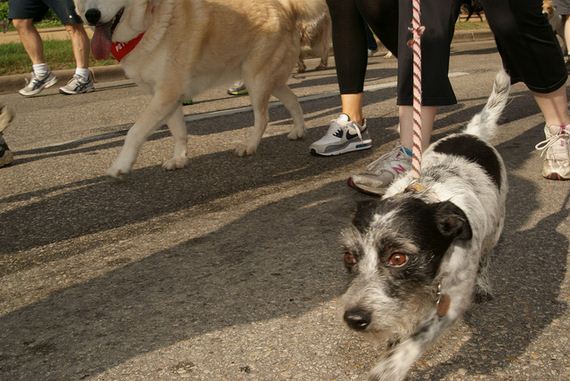 So now that you know some of the physical dangers that can happen as a result of your dog pulling or getting jerked on a collar, you may be wondering  – what do I use or do instead? Here are some “quick tips” to removing the pull from your dog’s life:

Use a harness – As the one study showed, harnesses are far safer than collars when it comes to putting pressure on your dog’s body. Be sure you are using a correctly fitted harness that is the right style of your activity. Consulting a certified canine physical therapist or veterinary is the best way to do this.

Positive Training – Switch to using positive-reinforcement training and eliminate the need for “collar corrections,” choke and prong collars. You and your dog will have a better relationship and you won’t end up paying thousands of dollars for neck injuries at the vet.

Breakaway Collar – As Stafford suggests, use a breakaway collar for in the house or out the yard where your dog may not be being watched all the time. These are great, because they release when necessary, but for walking and training, you can “override” the safety feature by clipping the leash to the two D rings, so your dog can’t break away during a walk (of course, if your dog is a puller, the leash should be attached to a harness anyway!) 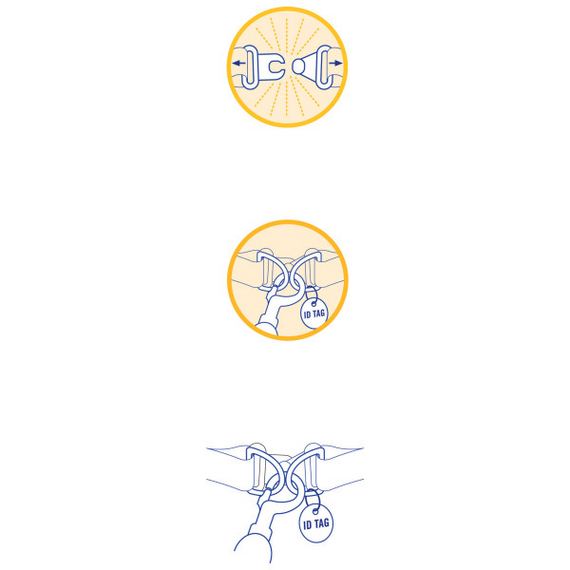