We have talked about unlikely friendships in the past, and this story is one of them. We are talking about a baby elephant and a German Shepherd who have become the best of friends since the first moment they got introduced together. The thing is that the baby elephant named Ellie was rejected from his herd, therefore he was left to die all alone. That is when Thula Thula Rhino Orphanage in South Africa decided to swoop in, and rescue the abandoned little baby. Even though their orphanage is mostly for baby rhino’s they decided to give Ellie the help he needed, at least until he is a grown up. 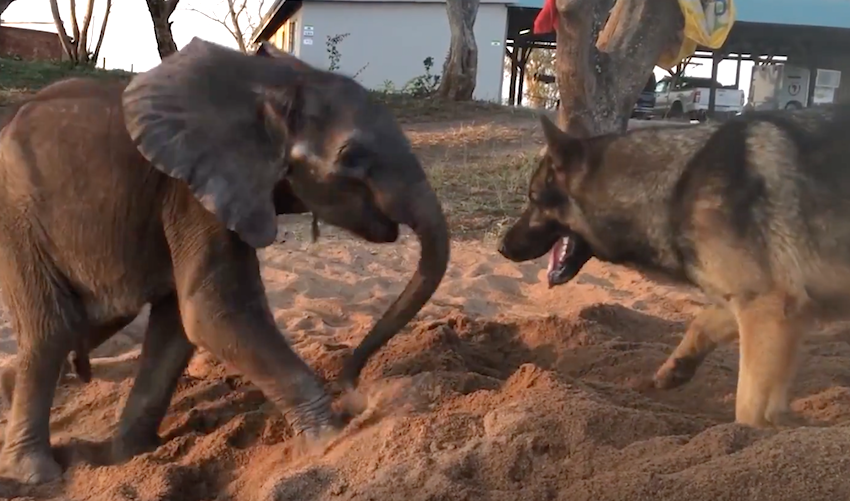 When they got the baby to the orphanage, they were able to notice that he was suffering from an umbilical infection that could have been fatal. Luckily the elephant survived, but he was suffering from depression. He had no interest in doing anything the whole day, he just sit inside all day long doing nothing. But everything changed once he meet the dog (Dumma). He was a service dog in the orphanage that bonded immediately with the elephant. The two of them started spending a lot of time together, and as soon as Dumma came into the scene, everything changed with Ellie’s behaviour.

She started getting more sociable, and less depressed over the days. Nothing was the same as before. The two of them play for long hours together, and their friendship just keeps on growing over the days. Now Ellie will not feel alone because she has gotten herself a friend for life. And friends like these two are just so hard to find these days. We truly hope they have the best time together, and we hope that Ellie overcomes all her fears, and depression once and for all. For more details you should watch the video below.