Bobby Humphreys, a bodybuilder and carpenter from Maryland, prided himself on being a man’s man with an affinity for fast cars, Rottweilers, and anything big and tough. “I was just that ‘Big Dog Guy,’” Humphreys told The Dodo, recalling how he used to make fun of male friends for even walking their girlfriends’ small dogs. “I never even thought of a little dog.”

However, everything changed when Humphrey’s wife of 17 years walked out. Suddenly depressed, alone, and suffering from a serious shoulder injury, the days dragged by until a friend unexpectedly asked him to dog-sit. Unfortunately, the dog in question was also a Chihuahua, which put this self-professed “Big Dog Guy” in an awkward position. 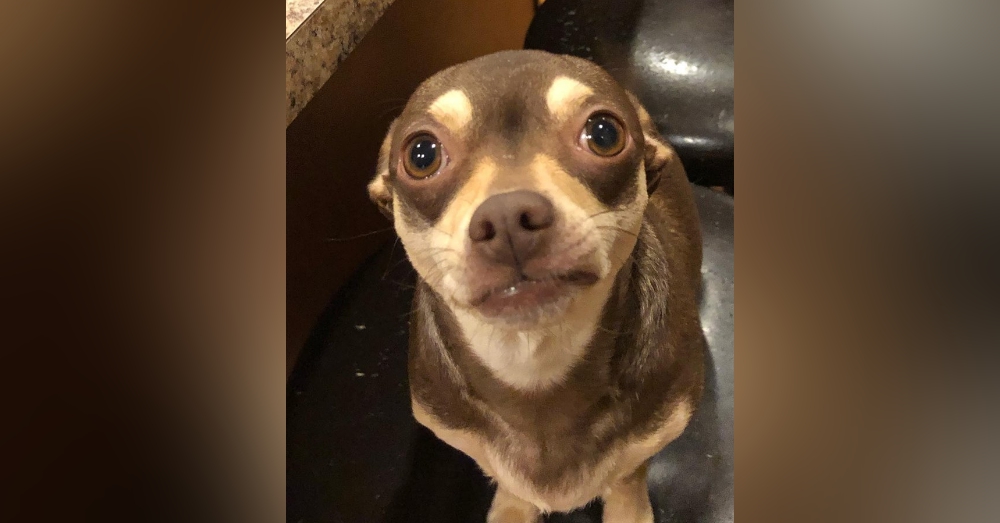 “[Lady] had this terrible disposition that was very well-known,” Humphreys told The Dodo. “I just steered clear of her when I saw her at functions with friends. I would just pay her no mind because I wasn’t into little dogs.”

However, Humphrey’s felt like he owed his friend, so he reluctantly agreed, even though Lady initially spent her days inside her kennel. But one day after work, Humphrey – whose changing circumstances had naturally inspired some deep introspection – suddenly decided Lady shouldn’t waste her time cooped up inside. 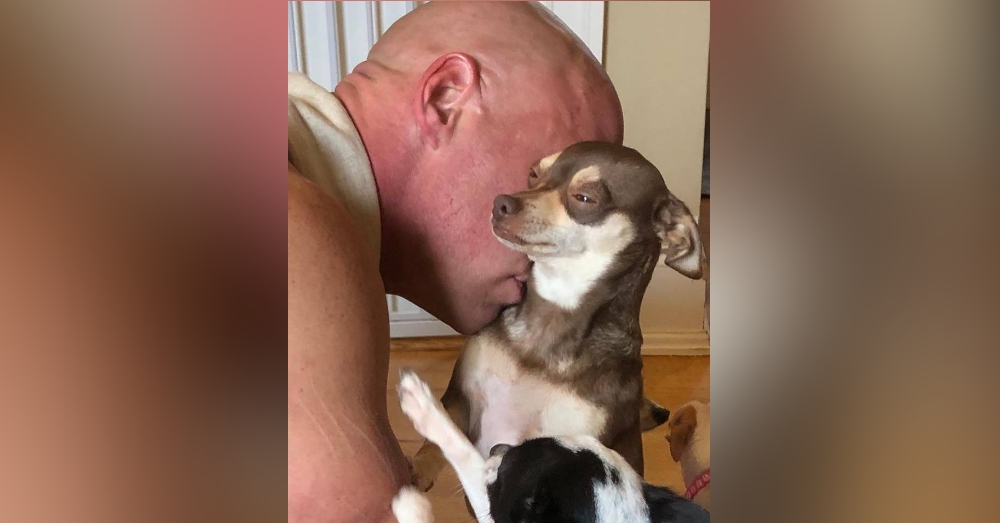 “After about 15 minutes I said, ‘Screw it, I don’t care if this dog bites me or not, she is not going to be sitting in a kennel,’” Humphreys told the Dodo, remembering how the tiny creature crawled into his lap. The extremely odd couple have been an item ever since.

Over the months, Lady would become instrumental in helping the bodybuilder manage his depression, which regularly confined him to bed. “The only thing that was keeping me going was Lady,” Humphreys told The Dodo. “I’d lay in bed all day with her, we’d play, we got so close. I fell in love with this little dog.” 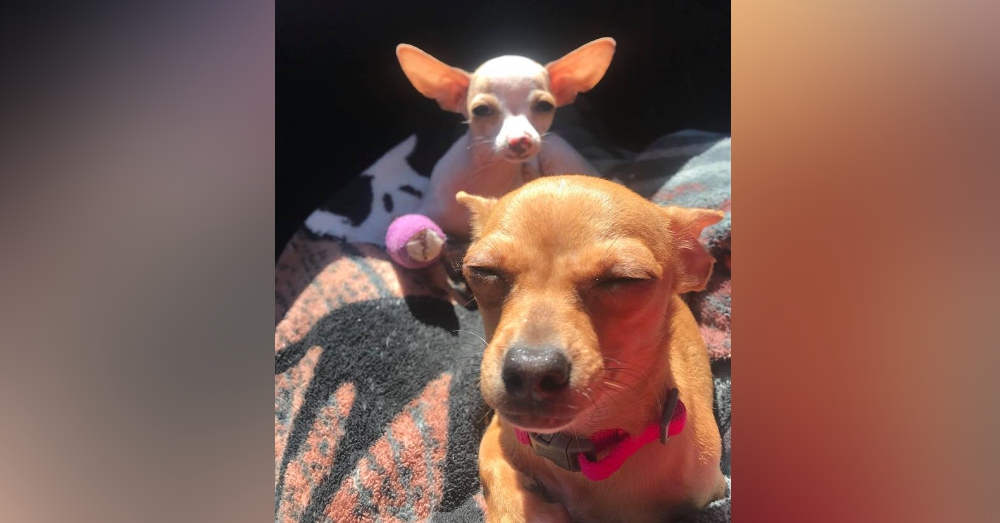 But Lady was also on loan, which got Humphrey not only thinking about adoption, but seriously considering rescuing another Chihuahua. This unexpected twist led him to Kira, sisters Harley and Quinn, and Bella, a Chihuahua who’d suffered serious neglect at the hands of her previous owner. Nor was this injustice limited to just this one case. Humphrey’s noticed a clear pattern of abuse perpetuated towards the defenseless breed.

“So many of these little beautiful babies are being abused or taken advantage of and I just couldn’t sit by and watch it happen,” he told The Dodo, recalling the thinking that inspired him to found Big Guy, Littles World Sanctuary to rescue and rehabilitate abandoned chihuahuas. 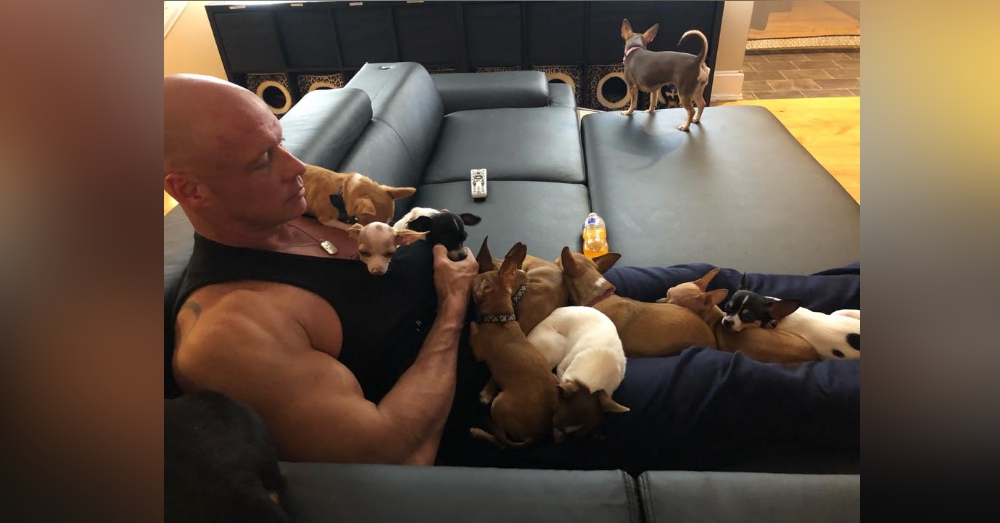 “I’m a big guy, but I’m technically living in this little world, because no matter if there’s 37 [dogs] like there are now, or there’s two, my entire life revolves around them,” he told The Dodo of his growing four-legged family, which has given him so much love and support in return.

“There’s just a heart inside these guys that’s truly amazing,” he said. 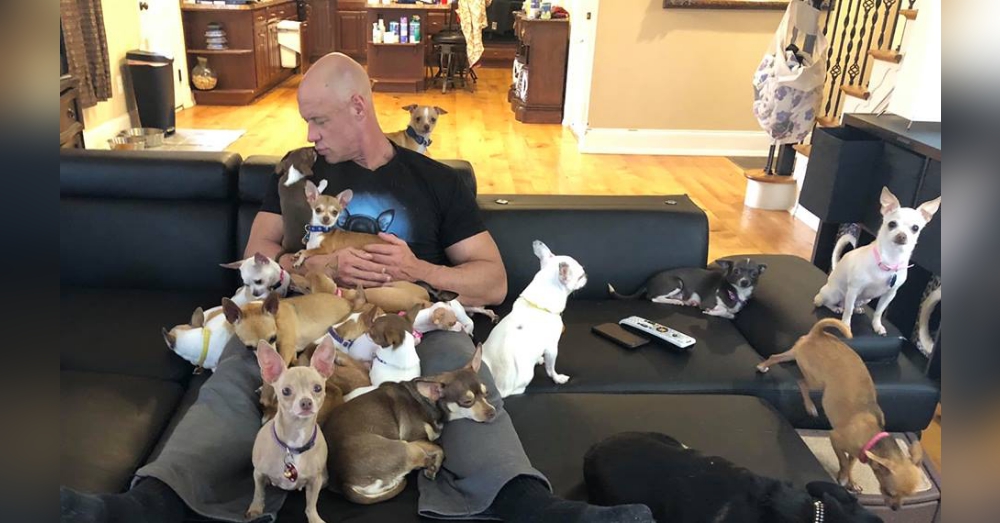