Sitp, a public transportation company in Colombia, is receiving harsh criticism for the lack of training its bus drivers have. This, after a cell phone video of a Sitp driver refusing to transport a blind man and his guide dog went viral on the Internet.

The events happened in Bogota, Colombia. A blind man aided by his service dog boarded the bus for route 135 in the Engativá sector, however, after the disabled man took a seat, the bus driver parked the bus and started a heated conversation with the blind man and other passengers. 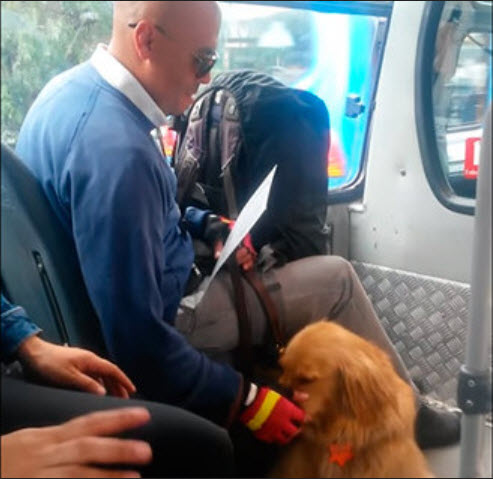 The driver refused to offer the public service to the blind man as long as the dog was on the bus. He demanded the dog to be inside a crate, be left at the bus stop or placed in the bus’s locked luggage compartments. However, bus passengers who knew the law defended the blind man and his dog.

In the video you can hear passengers call the driver’s demands absurd. During the heated discussion, commuters called the driver “ignorant” and said he had no right to refuse service. All service animals and their owners have a constitutional right to board public transportation.

The confrontation got so intense that transit security officers were called to the bus’s location. A woman also tried to improvise a muzzle and see if with the driver would restore service, but even with that solution the driver refused to move the bus. 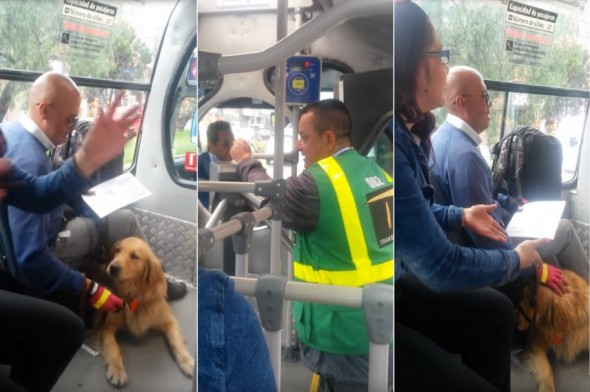 After a while the driver came to his senses – thanks to the passengers’ reaction and support towards the blind man – and the bus continued his route.

Sitp representatives said in a press release they will train their employees better.

Carlos Parra, director for country’s blind association told Caracol News he was ashamed of the driver’s actions but unfortunately Colombia’s blind citizens face this type of discrimination daily. Parra also said he was proud of his fellow country men and woman for standing up against the bus driver and not allowing such injustice to take place.