Lots of people bring their dogs to work, but how many of them can say that their dog is the one pulling in the paycheck?

Piper is a border collie and possibly the cutest employee on payroll at Michigan’s Cherry Capital Airport. His story of patrolling the airport recently blew up on Reddit, and now the whole world wants to meet him.

Dogs have many important roles in society — like this service dog who dialed 911 to save its blind owner from dying in a fire — but they often go unappreciated.

With his no-nonsense appearance and style — and one incredible video, shown below — Piper has been able to give the world a new appreciation for airport dogs, which are an important part of airport operations and security.

Now it seems like everyone wants to hang out with this super-cool dog who doesn’t even bat an eye at a passing helicopter!

Scroll through below to learn more about Piper and the important role he plays in keeping travelers safe. 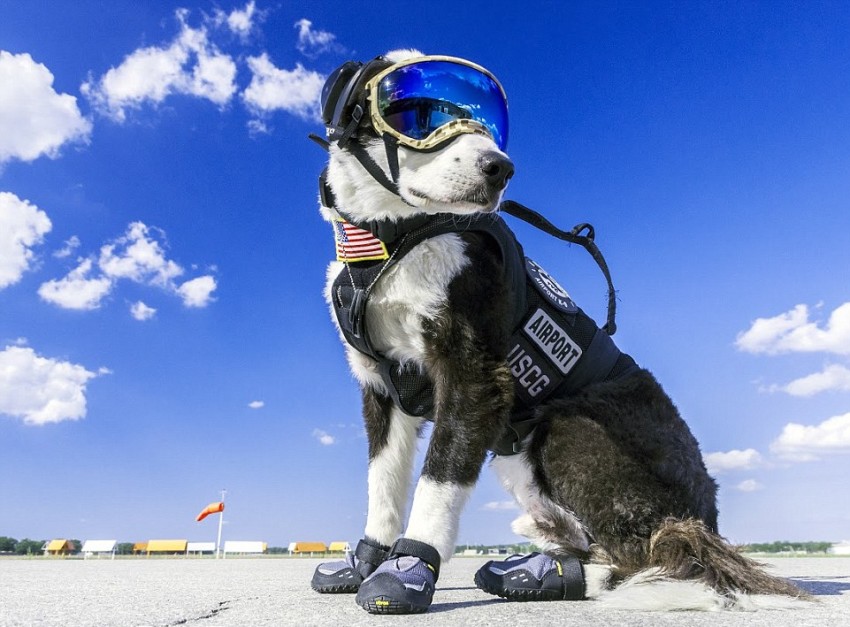 He’s a 7-year-old, high-drive border collie who loves to work… and boy does he look cool doing it!

K-9 Piper’s main job is to increase safety by responding directly to reports of wildlife on the runways and conducting regular patrols.

He spends most of his time chasing birds away from the runways and taxiways.

He also flushes out the rodents that attract birds of prey, and detects holes under the airport’s fence.

This video of Piper looking like the coolest dog on Earth has earned him quite a bit of attention.

Most dogs wouldn’t sit still while a massive helicopter passed directly behind them, but Piper takes his job very seriously! 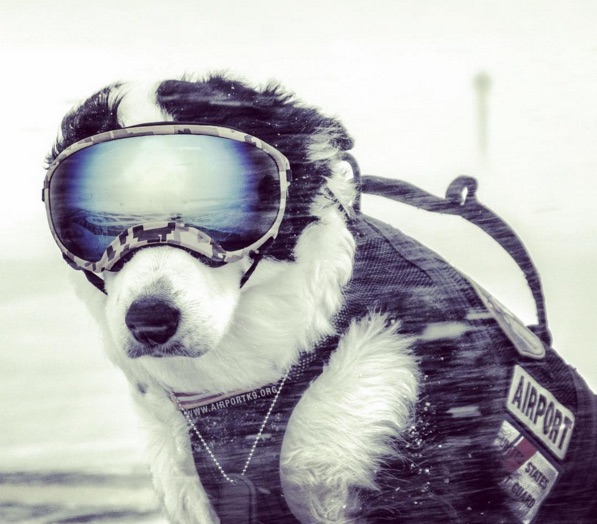 The Federal Aviation Administration requires the Cherry Capital Airport to have a Wildlife Hazard Management Plan in place to mitigate wildlife hazards to aviation.

Though rare, dogs are one of the most effective methods of wildlife mitigation at airports.

Piper is the only Wildlife Control K-9 on staff at an airport in Michigan and likely one of less than 10 in the United States. 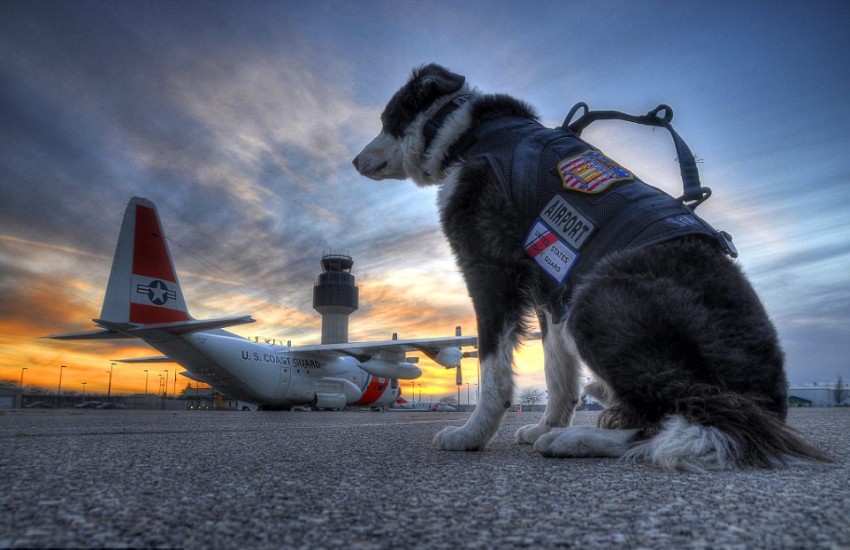 As an important member of airport security, Piper has to wear an official uniform.

This consists of 100 percent UV-protective safety goggles, earmuffs that protect his ears from the loud sounds of aircraft engines, an aerial insertion vest that makes it easy to lift him over barriers, and boots that protect Piper’s paws from hot pavement, rocks, snow, and ice. 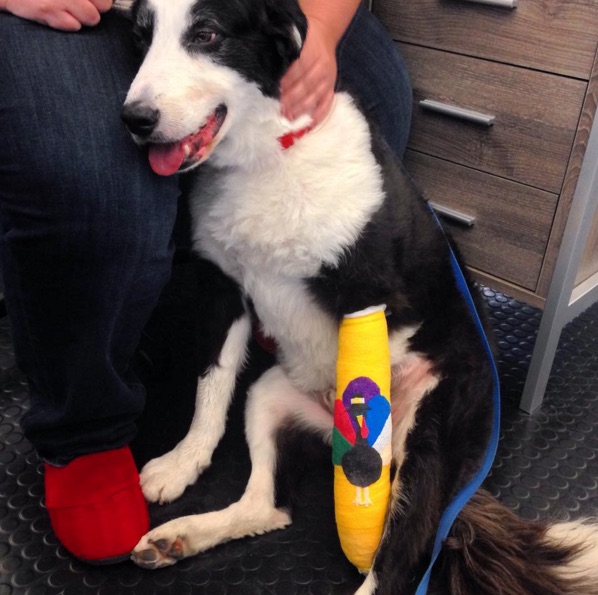 Despite all of that gear, Piper still runs into trouble sometimes.

In November 2015, he fractured a toe after he was deployed to chase a snowy owl away from the airport.

But fortunately, he healed up nicely and will soon be able to take the cast off! 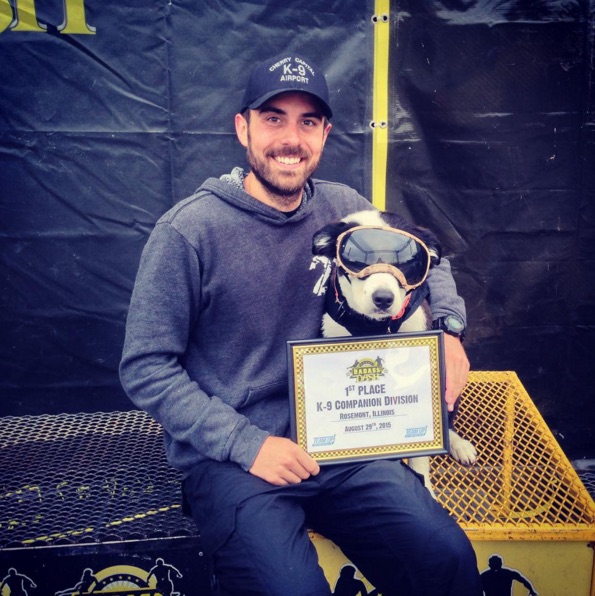 As cool as he is, Piper is only one half of the K-9 team at Cherry Capital Airport.

The other half is his handler Brian Edwards who has been at the airport as an Airport Operations Supervisor since 2008.

When they are not working, Brian and Piper are always training. They have even won a few 5K obstacle races together! 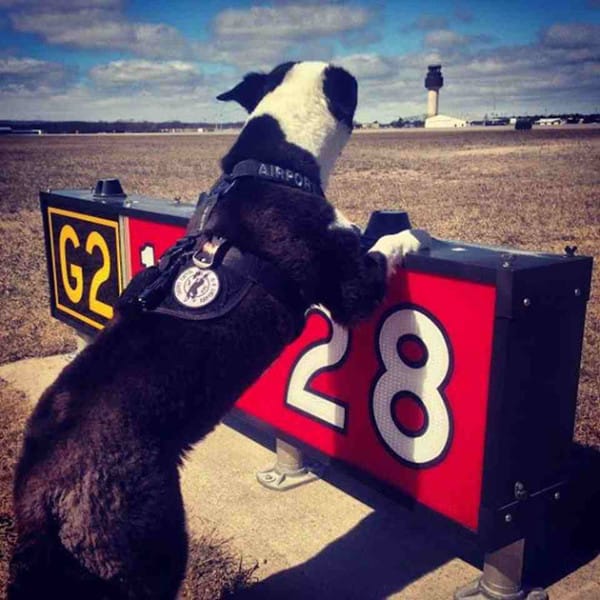 The truly amazing thing about Piper and his partner Brian is that they operate as a fully volunteer-supported unit.