Milly P Hope was found by a good Samaritan on a cold, wet, busy highway in Lubbock, Texas. Milly was dragging herself down the road in the freezing rain, unable to use her rear legs. She was badly injured and in danger of dying from shock and hypothermia. She was quickly loaded into the car, wrapped in blankets and taken to a local vet, where it was found that she was only about 4-months-old, had a badly broken leg and multiple cuts and bruises on her other legs presumably from being hit by a car. 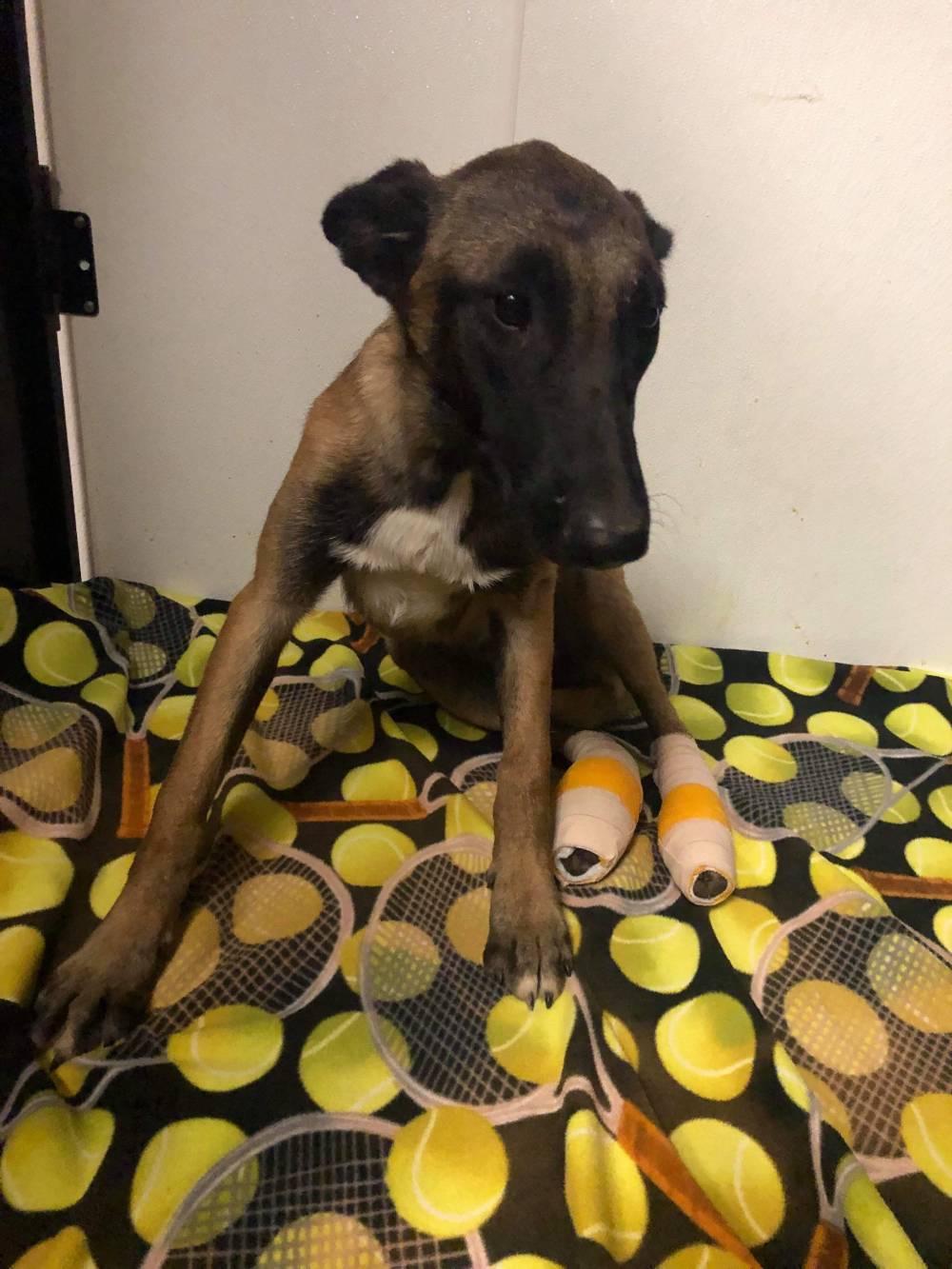 American Belgian Malinois Rescue (ABMR) was contacted to assist, and assist they did! They authorized the surgery to have Milly’s rear leg pinned and repaired. However, it became apparent that the circulation had been too badly damaged, and sadly the leg had to be amputated.

Soon after, Milly was transferred to a medical foster home in Houston where she would learn to walk again on three legs. A special harness was used to help hoist Milly’s rear end and help support her while she gained the strength and balance to walk again.

Milly learned to walk first, then play, then run, then onto climbing stairs and fetching the ball. She loved her foster brother who was by her side the whole time, being gentle with her and yet not giving her any slack when it came time to play, making her work hard to keep up.

Her foster mom soon discovered that Milly had a very high retrieve drive, so this was used to encourage Milly to run and play to become strong, lean and muscular. Milly traveled to Colorado and learned to run and play in the snow, to jump in and out of a truck while traveling and negotiate lots of stairs. Milly was becoming a part of her foster family! 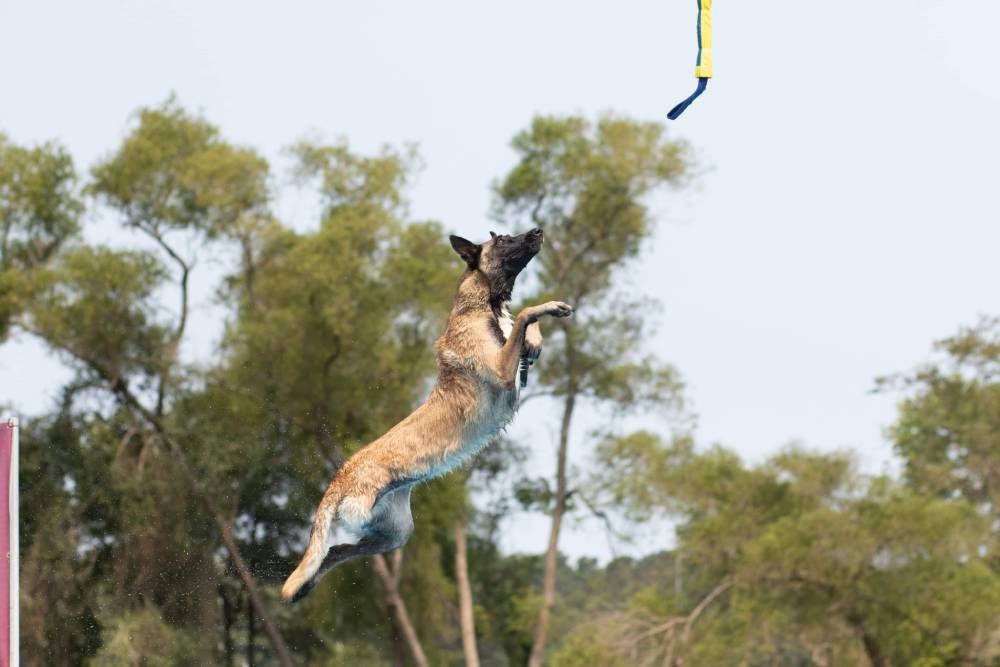 Then COVID hit. Life came to an end. Milly couldn’t go places anymore for additional training and socialization. So, one day Milly’s foster mom was bored and wondered if a three-legged dog could swim. Well, why not?! Milly had learned to do everything asked of her. Why not this, too?! So, the adventure began to teach Milly to swim in the back yard pool.

To this point, Milly had been game for anything introduced to her as long as her foster brother and foster mom were there to cheer her on. It didn’t take long before Milly discovered that swimming was SOOO much easier than walking and running! Within days, Milly was jumping from the edge of the pool, and within a month, her jumps were so long, she was almost out jumping the length of her foster mom’s pool.

From then on, Milly was no longer treated as disabled; she did as well as any four-legged dog or even sometimes better! Amazingly many people didn’t even notice that she is missing a rear leg!

Milly has gone on to gain several advanced dock diving titles and qualified to go to the 2021 dock diving south central regionals. Milly didn’t get to go to the national competition this year, but just wait! Milly is training in Barn Hunt, Fast Cat, Lure Coursing and is also training to compete in AKC Scent Work. Tripod dogs are now allowed to compete in agility, so that is Milly’s next goal! Milly LOVES competing and training, it keeps her strong, agile and active. 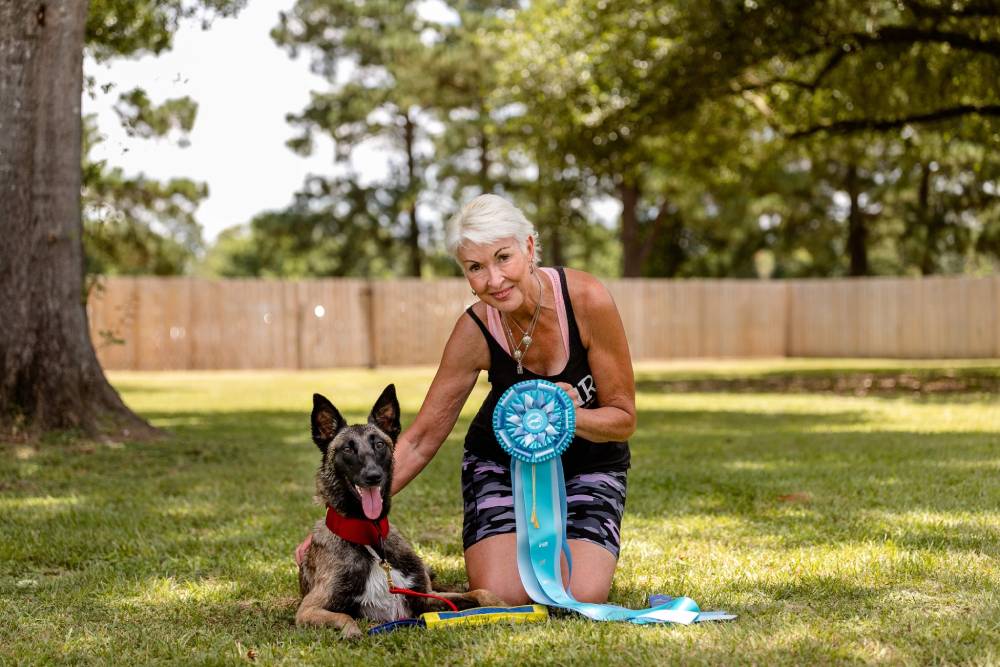 Among Milly’s other talents are being crate trained, house trained, good on leash, and knowing many commands and tricks. She is a Velcro dog who loves her mom and will gladly snuggle on the couch and watch TV in the evenings. She has no reaction to loud noises, vacuum cleaners, or thunder, loves being dried with the hair dryer, loves the snow, hates squirrels and has a goal of killing one someday if her mom will let her.

She lives with two kitties whom she considers a part of her pack. She loves raw hide chew bones. She is totally addicted to them! She has no food or toy aggression, and LOVES her mom more than anything in the world except maybe her dock dive toy! She is very protective of her mom and will react to anyone who approaches too fast or is a stranger.

Milly loves to help foster puppies and has taken on the name of Momma Milly. Though never having had puppies herself, she mothers the babies, is patient with them and teaches them appropriate behavior as any good mom would.

Milly is a talker and won’t hesitate to let you know what she thinks about something, all you have to do is ask her! She loves her “chuck it” stick and will happily play fetch until YOU are tired. She loves to play keep away from her foster brother and is quite agile and fast on three legs. Milly is fearless and tackles any situation head on with no hesitation, nothing will stop her! Her zest for life is a lesson all of us can learn from.

Oh, and by the way Milly became her foster mom’s heart dog and was officially adopted long ago. Truth be told, Milly’s mom wanted a sport dog to compete with and never imagined in a hundred years that that dog would end up being a disabled dog!