Kristin Crankshaw didn’t know what kind of reception she would get from the big furry dog pressed up against the door. She only knew she had to open it.

After all, it had been at least three weeks since the dog, named Ali, had left this upper-level patio. 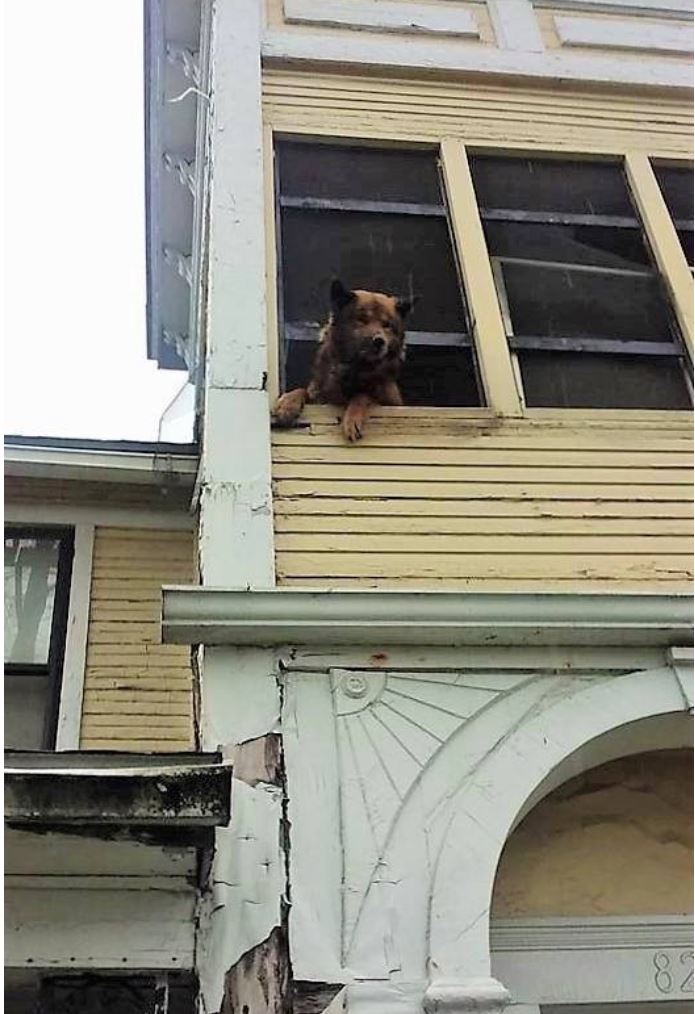 How would this older, isolated dog respond to strangers suddenly appearing at the squalid balcony?

“Not knowing the dog, we were a little bit nervous at first,” she tells The Dodo. “The door to the patio was locked and I was like, ‘Okay, are you ready for this?'”

“I opened it up,” she continues. “There was another screen door. He jumped up on the screen door and was looking at us. When I opened it up, he literally grabbed ahold of me and my friend Nancy.”

Crankshaw was at the house near Springfield, Ohio, this week because a neighbor had reached out to her rescue, The Backyard Dog Project.

“They told us that the owner had been incarcerated around March 18, which meant the dog had been alone for three weeks,” she says.

Once there, they found the dog trapped on a balcony and no water in sight. 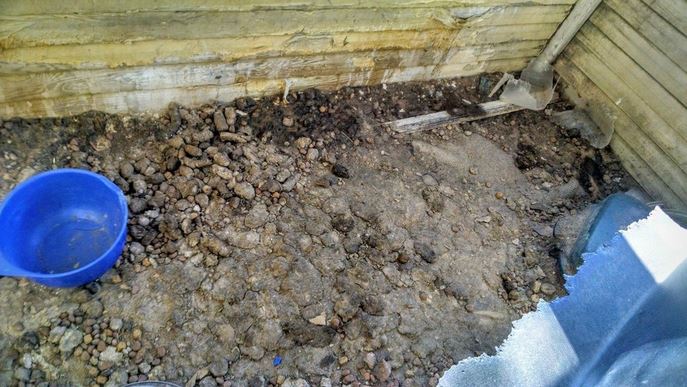 “Apparently, his ex-girlfriend had been coming sporadically to feed him,” Crankshaw explains.

But the ex-girlfriend had told the neighbor she didn’t plan to return — and gave him the apartment keys.

That left Ali alone, on a porch. With nothing more than a strained view of the street below. 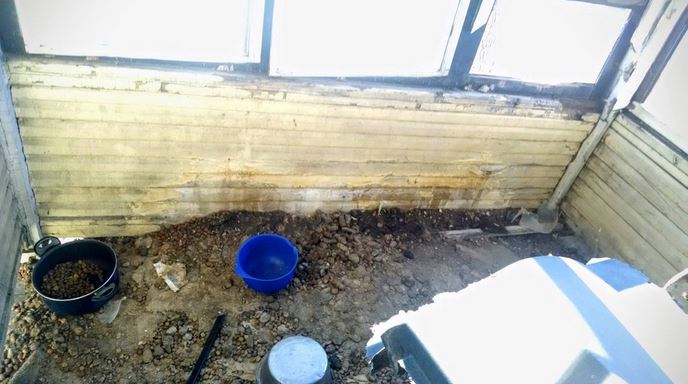 “There was food but it was just thrown all over the floor. I wonder if, because she was coming every three or four days, she may have just brought the whole bag and let him have at it.”

When Crankshaw opened that door this week, all the love that had been pent up in those cramped confines was unleashed. 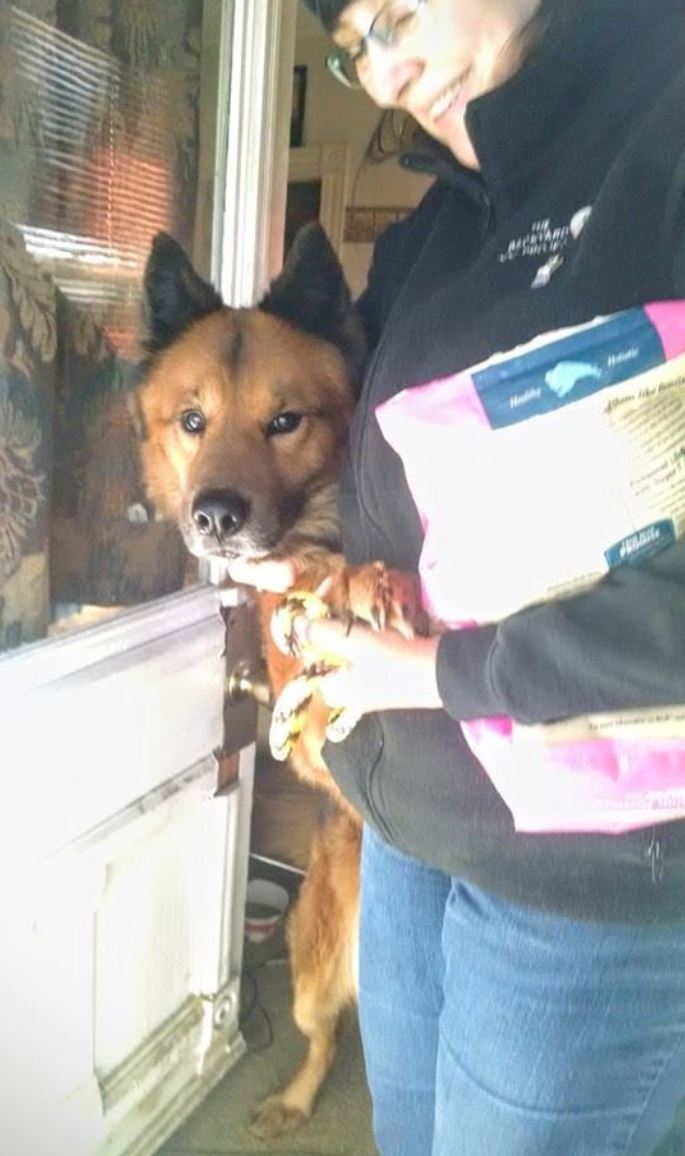 Despite his ordeal, the 9-year-old dog appeared to be in reasonable health. And, somehow, in the most buoyant of spirits. High, perhaps, on sheer gratitude. 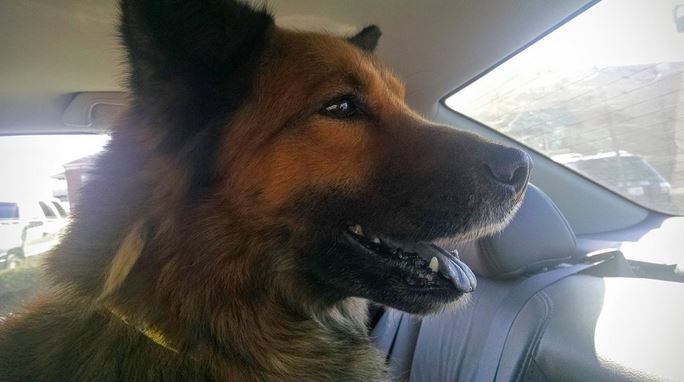 Today, Ali is staying at the Clark County Humane Society. He’s received his shots and been dewormed. There’s a three-day waiting period before The Backyard Dog Project can claim him from his former owner. By Friday, Crankshaw expects Ali to be in the group’s care. 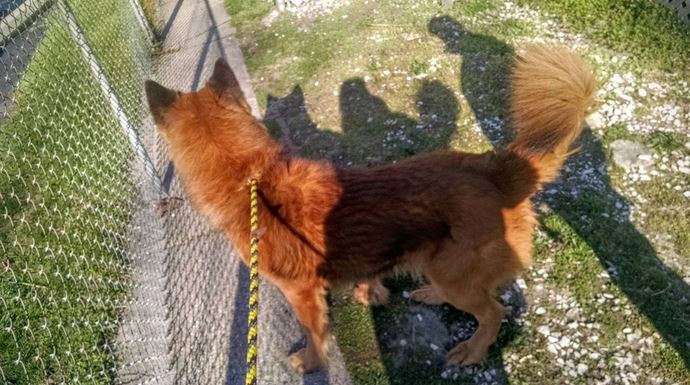 And then? They’re hoping someone with plenty of love to give can take this friendly giant home for good.