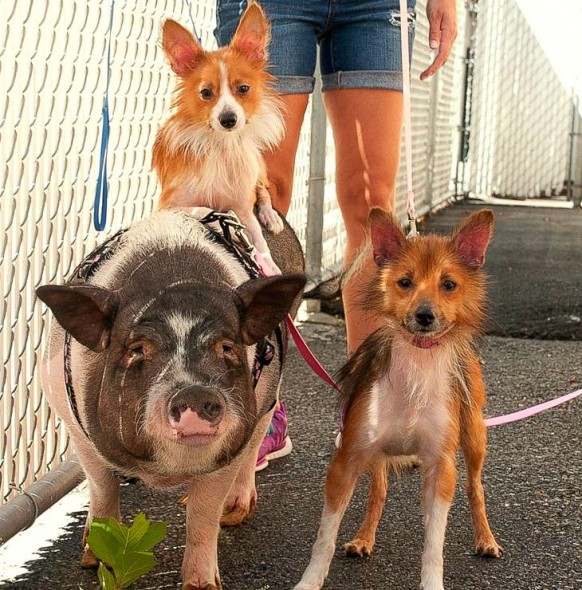 Back in September, two dogs, a pig, and a turtle were dropped off at an animal shelter in Pennsylvania.  Some people expressed an interest in adopting the dogs, and others really wanted the pig.  But they were all so well-bonded that they needed a home together, which was a problem. (The turtle didn’t really care.)  Thankfully, one woman knew she was up for the challenge, and now they’re all living together on a 72-acre farm.

When the dogs and pig were brought into the Animal Rescue League of Berks County, it became quickly apparent that they loved each other and needed to stay together.  They named the pig Pattie, and called the dogs – Chihuahua-Pomeranian mixes – Pickles and Paprika.

“From the second we saw them, we knew they were bonded, though the turtle wasn’t.  Pickles was standing on Pattie’s back and Paprika was right up next to them. When we took them out, the turtle came out from the back. We put them into a kennel, they curled up together,” shelter manager Sarah McKillip told ABC News.

“They hang out together all the time, sleep together, play with each other and even go for walks with each other. Sometimes Pickles, the smaller one, will ride Pattie’s back, and she’ll walk around with him on top. It’s hysterical!

“Pattie’s very intelligent and she’s very attached to them, so we don’t want to split them up.  When we first got them, we once moved everyone outside to clean the kennels, but Pattie found a way to open the door into the kennel and let the two dogs in. We had to chase the three of them through the kennel. It was hilarious.”

She said that the only thing the crew didn’t do together was eat, because Pattie would gobble down the dogs’ food.  Keeping them together was top priority, but after two months at the shelter, no one was willing to take all three.  But as fate would have it, just the right person saw a story about “Triple P” and shared the link with Kristi Dimond Mahar.

“As soon as we met them we said, ‘If they need a place to go, they can come here,’” Maher told the York Daily Record, speaking about her animal sanctuary, Blue Hound Farm. 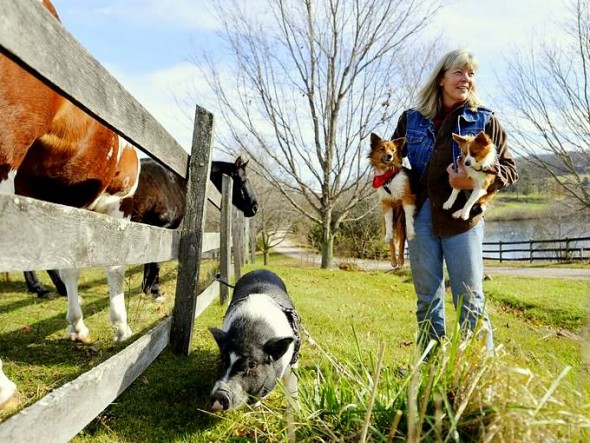 The three fit right in.  Already residing on the non-profit farm are two other dogs, eight horses, six pigs, three cows, and a number of sheep, goats, chickens, and geese. Mahar wasn’t crazy about the names, so she named the pig Maggie, and the two dogs Missy (the larger of the two) and Mack.

They’ve all made themselves right at home, but (perhaps because of their past), Mahar says all three are very needy.  The dogs are very smart, but need some training, and will begin obedience school in February.  She believes they may be part Sheltie, as they seem to have a herding instinct.

“Mack stares at me all the time,” Mahar told me.  “He really loves me and I think that is because I really believe Mack was his name before – when I first called him Mack – he looked at me as if I had known him all his life and has never stopped looking at me since!  Missy is just a good dog all around.

“Maggie can be very sweet but she cannot be trusted around people – she randomly strikes out without warning. I think she will get better as time goes on.  Unfortunately, Maggie is not the best house pig, she has learned to open the refrigerator and contractor will be here in February to attach it to the wall – afraid it will fall on her, so she is banned from the kitchen. She spends more time with the other pigs than in the house because of her destructive nature. Again, I believe once she feels completely comfortable her behavior will improve. The little dogs get along well with all the pigs.”

As for Storm Jonas, the three are taking it in stride.

“The dogs love the snow – they are so little, I have to watch them so I don’t lose them in it! Maggie, just like other pigs, doesn’t seem to mind the cold as long as she has a nice warm bed to lay in when she wants. Pigs like to sleep late and go to bed early in the cold.” 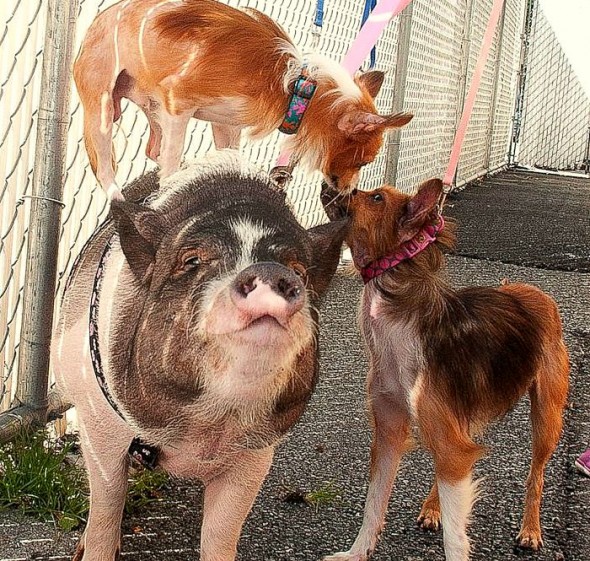