Lily, a two-legged Pit bull mix recently found herself at the Maricopa Country Animal Care and Control facility. Everyone thought she was a stray because she was picked up at a park, was not microchipped, and was turned into an animal hospital, but little did rescuers know the two-legged dog had loving owners who missed her and wanted their dog back. 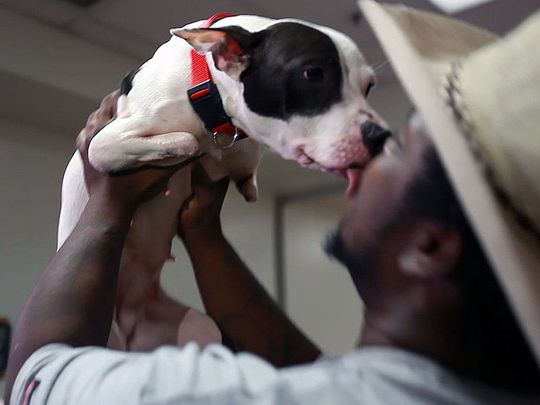 Animal Control workers found a foster home for Lily (the were calling her “Roo”) while they launched a campaign to get her the ideal forever home. They put together a press release package with pictures and information on the dog. A local news station ran a televised news story of Lily/Roo and her owners Katera Williams and husband Jermaine McCorvey recognized their pet and went to claim their dog.

Williams told AZCentral she had gone out of town and left her dog with a friend,. On an outing to a dog, Lily was left unattended for a few minutes before vanishing. Williams believes a passerby saw the dog all alone and thought she had been abandoned. The person took the pet and turned her in at an animal hospital.

Lily joined her family in Dec. 17, 2014 after she was found in a dumpster. McCorvey adopted the dog after a veterinarian examined the pet.

In the past, Williams and her husband tried to raise funds using GoFundMe to get their disabled dog a doggy cart, but the donation page had been unsuccessful and Lily simply had to learn to mobilize as best she could with just her hind two legs 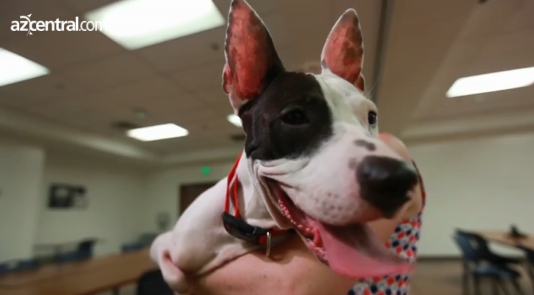 After the Maricopa Country Animal Care and Control launched their campaign, many animal lovers offered to help Lily. Cheryl Hintzen-Gaines and her husband from Phoenix, stepped up to pay for prosthesis or a wheel cart.

“I saw her on TV and she was [a] beautiful animal,” said Hintzen-Gaines. “I felt very sad to see this very active dog have to go around on her little stubby appendages. If prosthetics is what the dog needs, and/or little cart, we will do that.”

Thanks to a large community of animal lovers, Lily reunited with her loving family and is getting a wheel cart to help improve her quality of life.