We know animals are resilient, and many times they adapt to their environment and survive as best as they can. After all, there are millions of homeless dogs in the world that struggle every day to find food and shelter, but it amazes us how homeless dogs with disabilities are also able to thrive and survive life on the streets.

In China, there is a two-legged, female stray that has given birth to puppies, and even with her disability she still cares for her family and makes sure none of her puppies are in harm’s ways. 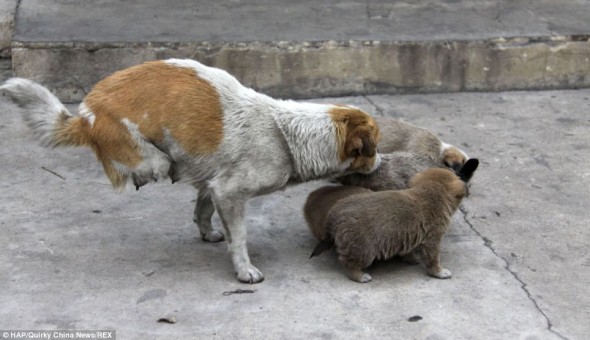 The momma is known as Shi Bao, and she wasn’t always homeless. Her owner abandoned her and she took refuge near Kouguan railway station in Datong, Shanxi Province. Unfortunately the abandoned pet lost her hind legs in an accident. Locals believe she was either hit by a car or run over by a train, but either way, she survived and has been fending for herself ever since.

Shi Bao gave birth to healthy, beautiful puppies, all have their four legs. Every day, the two-legged momma guides her babies around the train station while they scavenge for food. The heroic mom makes sure her children are always near her and far from harm.

We know animals in China are not as well protected by laws as other animals in other countries, but we hope that Shi Bao and her babies find a Good Samaritan or animal rescue organization that would take them in put an end to their lonely and harsh days on the streets. All animals deserve a loving home and Shi Bao has proved she is worthy of true love and a happily ever after.