Loud noises overhead from vehicles on the freeway – were the only sounds two scared Pit Bulls heard all day and night. The two dogs were abandoned and chained to a fence in an empty parking lot under the freeway.

Hope For Paws, an animal rescue organization, received multiple calls regarding the abandoned dogs. They found out that Animal Control was contacted, but no action was taken. Lisa Arturo and JoAnn Wiltz, from Hope For Paws, headed to the site where the dogs were reported. 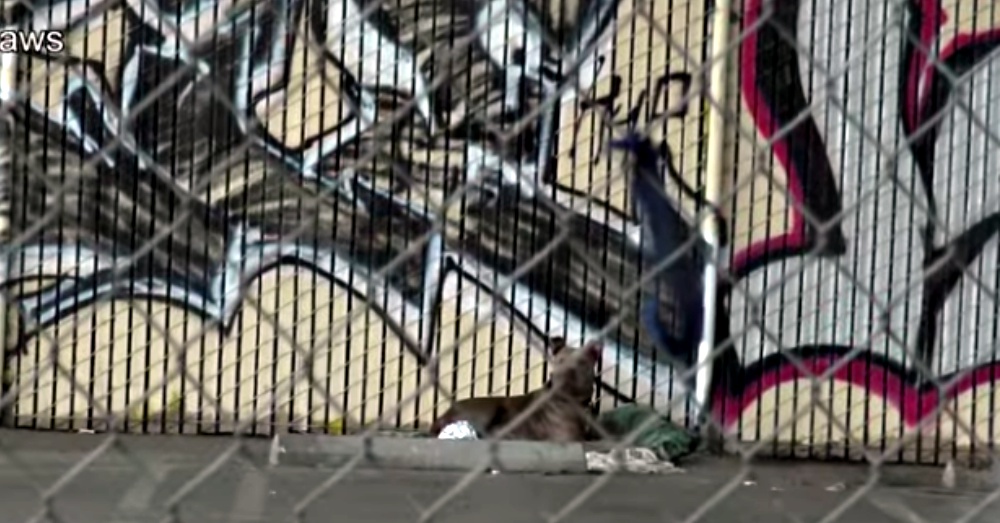 Upon arriving, Arturo noticed a police officer is parked nearby. She approached the officer and explained the situation of the dogs. The officer agreed that the team should rescue the dogs, and allowed them to enter the area. Once the rescuers were inside the parking lot, they were shocked at the site in front of them. 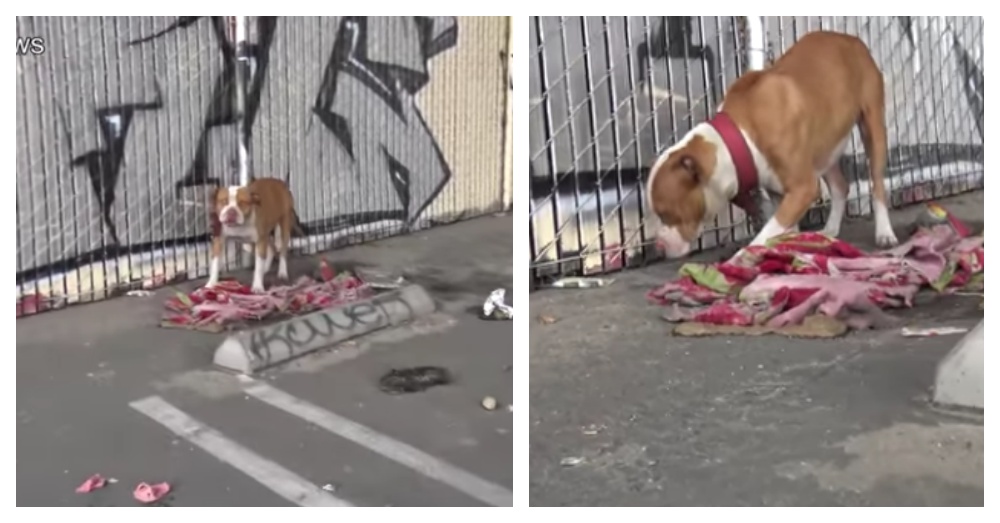 “Oh My God, you are totally chained in there,” exclaimed the rescuers as they approached the two terrified dogs. They threw slices of meat to show the dogs they were friendly. The starving dogs quickly devoured them. Both Pit Bulls were chained to the fence without food or water. All they had was a thin blanket covered in their own feces and urine. This broke the hearts of the rescuers. 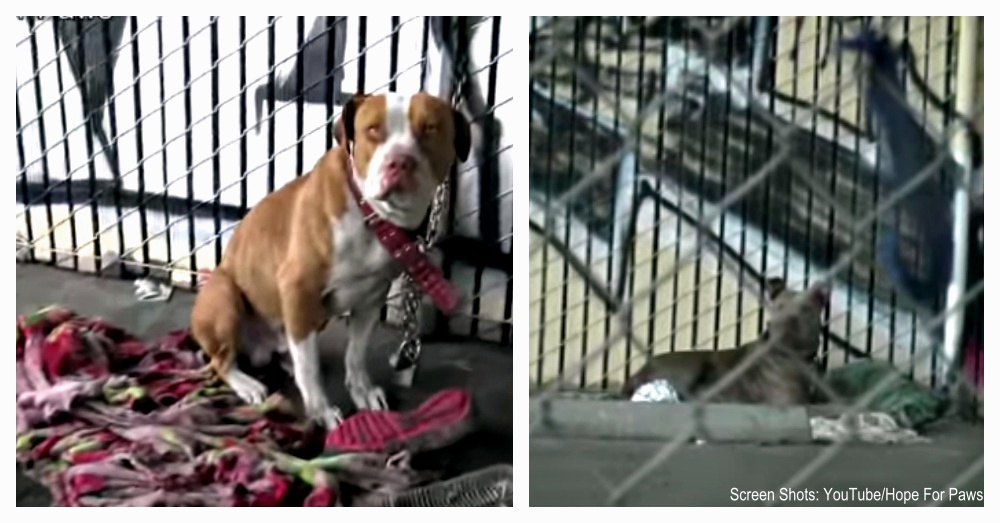 The team was determined to rescue the sweet dogs and show them a better life. Both dogs were nervous and scared, but were friendly. Although they were afraid, both dogs easily loaded into the vehicle to leave the dreaded area. Throughout the entire rescue, both women continued to reassure the dogs that they were safe, and everything was going to be okay. 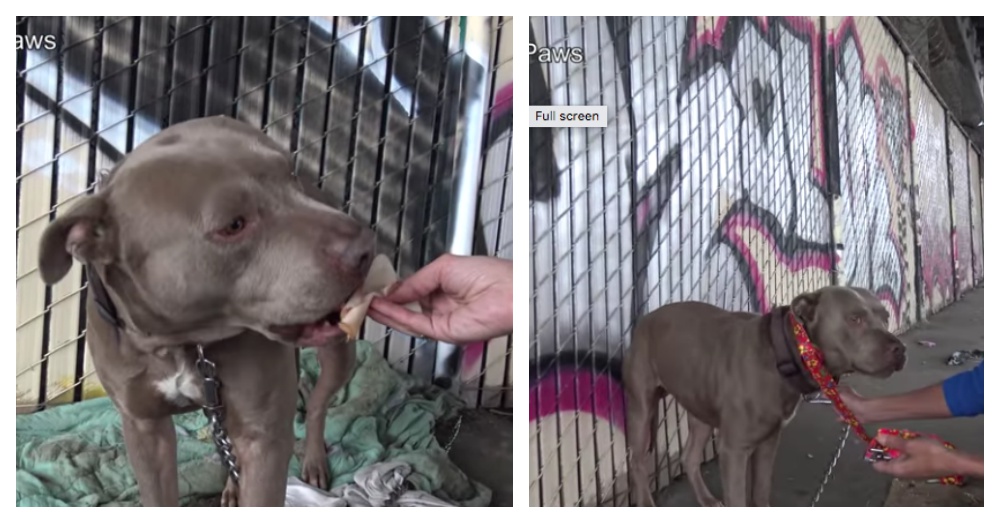 The dogs were brought to a vet for an exam. The rescuers named the handsome boys, Sir Guiness and Moose. After both were examined, the team decided the dogs would benefit from training. They sent the pair to Sunny Day Acres. Sir Guiness and Moose are doing well at training, and love playing with tennis balls. 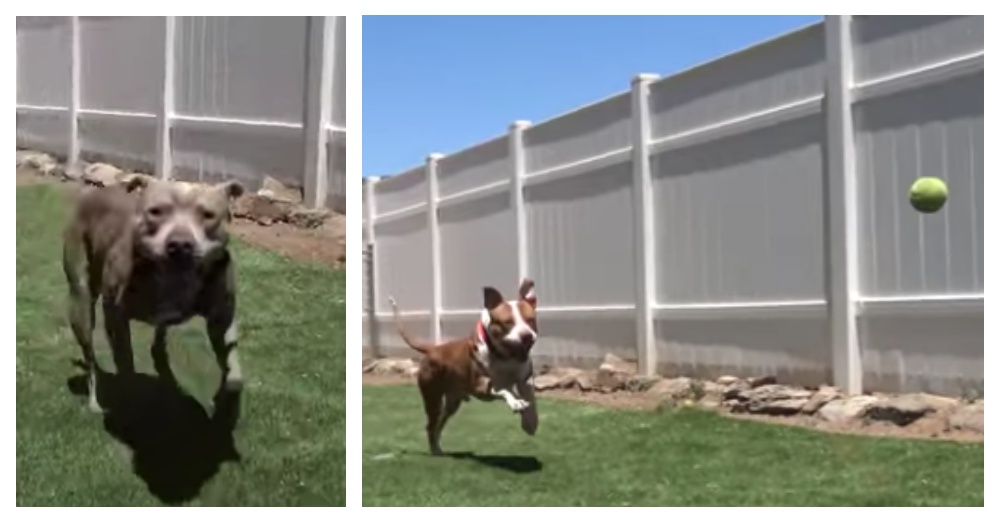 If you are interested in adopting one or both of the sweet boys, you can visit DoggieBonez. We hope they find their loving forever homes soon.

Watch the full rescue in the video below.