On Friday afternoon, two puppies were found in a trash dumpster behind a Texas grocery store. They were alive and just dumped and left to die. The staff at the rescue organization, San Antonio Pets Alive! found them. 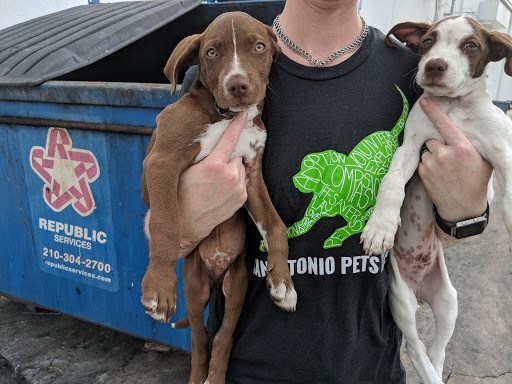 Earlier in the day, a man arrived at the rescue organization carrying two puppies and told the staff he wanted to surrender them. Because SAPA does not accept strays, they directed the man to the San Antonio Animal Care Services where he would be able to turn the puppies into a shelter. He obviously didn’t want to bother.

And now the two puppies, named Crockett and Bowie need help. Both have been severely neglected. According to the Facebook page for the San Antonio Pets Alive!, one puppy has already tested positive for Parvovirus.

“…Crockett and Bowie NEED YOU to be healthy puppies–they need A LOT of medical care NOW! … They were found covered in fleas and ticks, extremely hungry (may even have been starved)–and after immediate medical tests, both puppies have Ringworm and Coccidia (a parasite affects the intestinal tracts of dogs). Crockett (white puppy) also tested positive for Parvovirus.

These puppies will need a lot of medical treatment (including Parvovirus treatment which costs $500 a puppy), medicines, IVs and special food due to the severe conditions they were found in. Donate to help cover these costs!!” 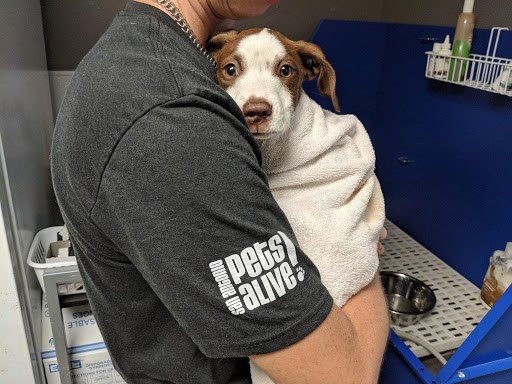 The police have been notified. It is illegal to dump or abandon a pet. Anyone recognizing these puppies or witnessed the man dumping them in the trash is asked to call authorities. Help those who cannot speak have a voice. They have no one else to help them besides us.

To help with their medical needs, donations can be made by clicking here.

(Photos of the two puppies found in trash dumpster via Facebook of SAPA.)