Most of us have seen search and rescue dogs locating lost children or workers in rubble on many of our favorite television shows. On TV, dogs use any means possible to find a lost person, from sniffing an article of clothing to digging through buildings tracking an individual’s unique scent.

While search and rescue dogs are plenty capable, most dog handlers train their dogs to perform either air scent or trailing dogs. The use of dogs in activities to help humans has become widespread in the last few decades. Dogs have been used for service due to their highly developed senses. Research also shows they can smell fear, anxiety, and sadness, giving way to a whole generation of service dogs used with the elderly, in hospitals, and for pet therapy.

Who would have thought a man simply out for a leisurely stroll with his furry friend could save two men from spending the night stuck in mud? 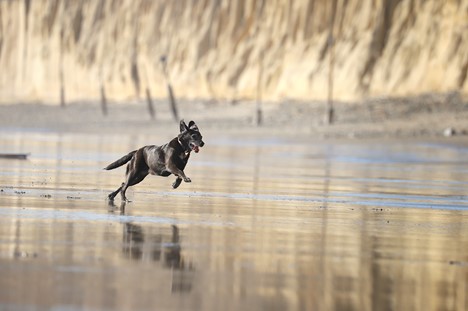 An early morning ride on a boat for two Texas fishermen meant a routine day of fishing, but on a fateful day in early December, it led to hours of rescue attempts, a helpful dog, and a helicopter.

On December 4 around 6:30 a.m., Bert Giles and Stevie Rodriguez loaded onto Giles’ boat to attend a fishing competition.

At this time of morning, Giles told CNN that the light was still low and you could only see what was right in front of you. The two outdoorsmen made their way up the river portion of Lake Amistad, a 65,000 acre lake which straddles the border of the U.S. and Mexico. The sandbar is about 150 west of San Antonio and 10 minutes north of Del Rio, Texas. 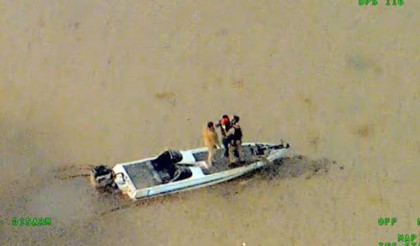 This area of Lake Amistad is where the pair came across a canoe that was capsized. The two men swerved to avoid it, but then decided to turn around to check on the vessel in case someone needed help. This is when Giles and Rodriguez’ boat became stuck in the thick mud.

“We were supposed to be fishing in a tournament that day,” Giles told KENS5, a news station in San Antonio. “We were running up the river, and it’s a route I’ve taken a bunch of times … Just all of the sudden the water dropped. In that early morning light, it looked like water all the way across there, so when I went to turn around, it was just mud.”

Fishing boats have little to no chance of making it through periods of low water due to the engine becoming “pitted” with corrosion. Just like pontoon boats, this is because the mud prevents dissolved oxygen in the water from being in contact with the aluminum. The aluminum of the tubes can then corrode with the oxidation protection according to the website Go Down Size.

In an attempt to assess what had happened and possibly make it over to shore, Giles jumped out of the boat to examine the situation further. As he hit the ground to see if there was a way to push the boat out of the mud to escape, he immediately sank up to his chest in the muck. With no cellphone service, the fisherman pulled out their emergency whistle.

According to the website GoTimeGear, the sound made from the whistle is recognized nearly anywhere in the world as a distress signal. It can be used across all use-cases, without having to learn or remember any complicated signaling. 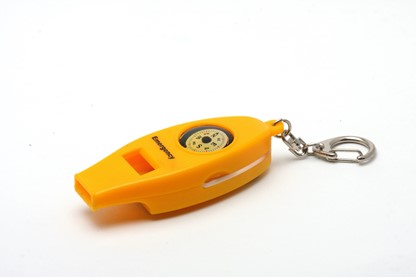 Three loud, short blasts on your survival whistle, each lasting approximately three seconds is common practice when in distress. Nearly anywhere in the world, the three consistent blasts would alert someone or draw their attention and will greatly increase your chances of being located to make it out of any situation alive.

In the case of Giles and Rodriguez, that someone was a dog.

“All of a sudden I hear a dog barking, and I told my fishing partner, ‘If there’s a dog around here, there’s got to be a human.’” Giles explained to a local CBS affiliate in Texas.

According to Morgridge, humans can hear sounds in a range from about 20 hertz to 23 kilohertz at the upper range of their healing ability. The hearing range of dogs is almost double that. A dog whistle is silent to humans as it produces sounds in the 50-kilohertz range.

Because dogs can hear sounds from farther away and detect higher-frequency sounds, their hearing can be significantly useful in situations like this. Due to the way that dogs’ ears are designed, the sound moves into the cup-like shape and is amplified, similar to the way humans can put a hand up to their ear to hear better. Dog’s also have the ability to move their ears around to hone in on sounds in different directions. Some breeds are quite literally built to hear better. While Labrador Retrievers and English Setters spent their days hunting, running and retrieving, some modern dogs, like terriers, have the ability to hear some very high-pitched sounds.

The dog that heard the distress sounds of Giles and Rodriguez’ whistle popped up from somewhere close to the water’s edge, and its owner followed behind just about 300 yards from the boat on the Mexico side. The man found the boaters around 10 a.m. with the help of his furry friend, only 3 and a half hours from the fisherman making their initial descent into the water.

The good Samaritan was able to make it to higher ground to receive a better cell signal to call for help, but it was not until around noon when Texas Game Wardens located the boat and the fisherman to begin their rescue attempt.

Faced with a new dilemma, the Texas Game Wardens could not pull the boat from the mud and because of the extremely soft ground, they could also not get their rescue boats close enough.

With the amount of mud surrounding them, the game wardens and the National Park Service (NPS) called the Department of Public Safety to send a rescue helicopter, but all those craft were all out for maintenance.

Dallas and Houston were the closest hubs that might send help, but by this time it was already nearing sunset. At last, the San Antonio Police Department was able to gather the supplies and ready their own chopper to the rescue.

The sun was setting quickly but once the helicopter arrived at the scene, it only took 15 minutes to extract both of the sinking men from the muddy waters utilizing a rope to joist the men safely to shore. From the time the men got stuck to when they made it back to land, it had been around 10 hours. 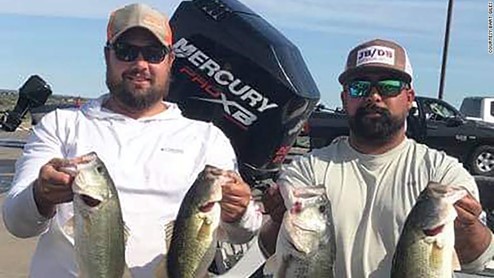 The boat, which belonged to Giles late grandmother, was also recovered and needed nothing more than a good cleaning and replacement of a few pieces of equipment.

“They had no idea how long they were going to be there, and so once they saw us fly over, they realized that their day was coming to an end,” said Sgt. Steve Tippett, the DPS diver who was part of the rescue team. “They were they were glad to see us show up.”

Had it not been for the keen ears of man’s best friend, the men might have been stuck in the thick mud overnight. The Amistad National Recreation Area where the men where stranded is home to a wide variety of mammals and reptiles including the venomous Trans-Pecos copperheads and western diamondback rattlesnakes.

Giles’ advice to others going fishing now consists of “Make sure you have all your safety gear and definitely have that whistle.