When Ginger went missing a few weeks ago, U.S. Army Sergeant Dahlberg and her family were left in a terrible state.  They were missing her very badly, and regardless of what they did, no one seemed to know anything about where she could have gotten off to.

Thankfully, Sgt. Dahlberg remained vigilant in her search for Ginger.  Along with actually looking around the area, she also remembered to keep in touch with local rescues and shelters.  It was through her efforts that she was finally able to locate Ginger.  The dog that she never thought to see again would be returned to her. 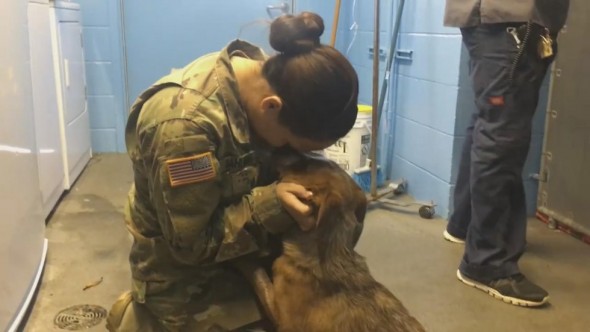 However, not everything was all smiles and hugs at the reunion.  Unfortunately for Ginger, while she was out and about, she contracted parvovirus.  The reunion was an emotional one, and it was caught on video, and shared to Facebook by Front Street Animal Shelter.

Ginger is a lucky dog.  She may have contracted a lethal disease, however she was found with enough time for treatment to work, and ultimately she’s expected to pull though.  Now that she’s back at home, Sgt. Dahlberg and family can concentrate on Ginger’s recovery, and her doctors are very optimistic.

“This disease can be lethal, but we were able to find treatment soon enough,” said Front Street Animal Shelter on Facebook.  “And it looks like she’ll make a full recovery now that she’s back in her loving home.”