The bonds forged in war are not easily broken, as former U.S. Navy SEAL Mike Ritland can attest to. The ex-soldier posted a very touching tribute on Facebook dedicated to his K-9 partner, Carlos.

The elderly pup had passed away after 15 years – a life that Mike described as nothing short of amazing and a blessing to those who loved him.

The duo were partners for many years. And once Carlos retired, Mike was able to adopt his buddy and the two of them had their happily ever after together. Carlos even would assist Mike at the program where he worked as a trainer. 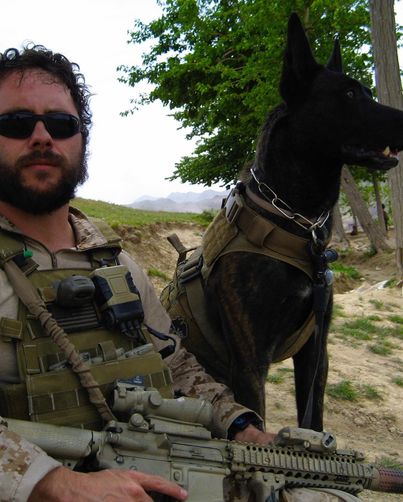 In the Facebook post, Mike shared that his beloved pup was wrapped in the American flag that Mike took with him through all of their operations together.

In fact, as Mike unfurled it, there was still some dust from Afghanistan that fell out of the material.

For their last meal together, Mike fed Carlos his favorite steak and cuddled his pup before he passed away. Mike could only describe the heartbreak as a feeling of heaviness at having to let his best friend pass on.

He concluded his sweet tribute by writing, “Fair winds and following seas C-man, we have the watch from here buddy.”