Ukrainians have shown they are brave, strong, resilient, and will do anything for those they love.

UAnimals recently shared an inspiring story about a Ukrainian man’s determination to continue his late wife’s mission to help homeless animals. Love knows no bounds, even in time of war.

Russian forces are attacking the city of Kurakhove where Mr. Vyacheslav lives but he risks his life to ensure the homeless animals near his home are fed and cared for. 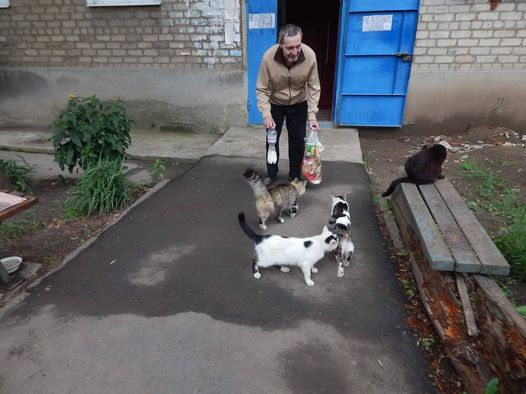 It was a cause near and dear to his late wife’s heart and one he promised to continue after she passed away.

Vyacheslav told UAnimals, “Restaurant Murnâv is a food point for the tailed homeless, which was organized by my late wife Lyuba. She was just feeding stray cats near the house, feeding with her last strength. On November 6, 2020, she passed away. On my wife’s grave, I promised to continue her business, feed homeless tailed until my last breath, which I do.”

While neither one could have imagined their beloved city would be under attack, the devoted husband will not abandon the animals who depend on him. He cares for ten homeless cats (three with disabilities), several dogs, and pigeons.

However, fewer animals have been arriving during feeding time and Vyacheslav is worried about their safety. He wonders if they are afraid and hiding from the explosions or if they have been killed. 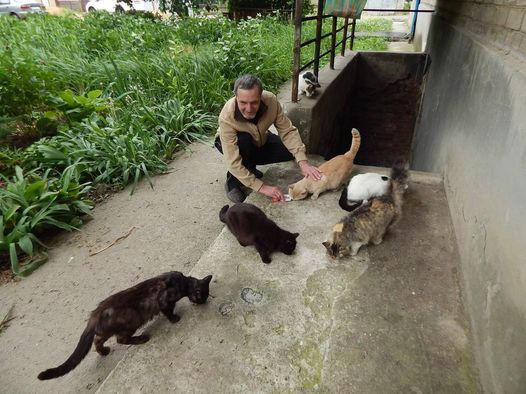 To assist in caring for the homeless pets, UAnimals sent money to the animal hero and wrote, “Our team dreams that the war will end as soon as possible.”

Vyacheslav is honoring his wife with his selfless act and other Ukrainians, like the strongest woman in the world -Anna Kurkurina, have also refused to leave because the innocent animals need their help.

As Paul McCartney said, “You can judge a man’s true character by the way he treats his fellow animals.”