On November 14, 2013, a mixed breed, family dog who had been given away to a stranger saved his two young human owners, ages nine and three, from being rape victims in Campo Ramón, Misiones, Argentina.

According to Clarin News, the girls’ mother reported to local police that her daughters had been dragged to a semi-secluded area, where a man attempted to sexually abuse them. 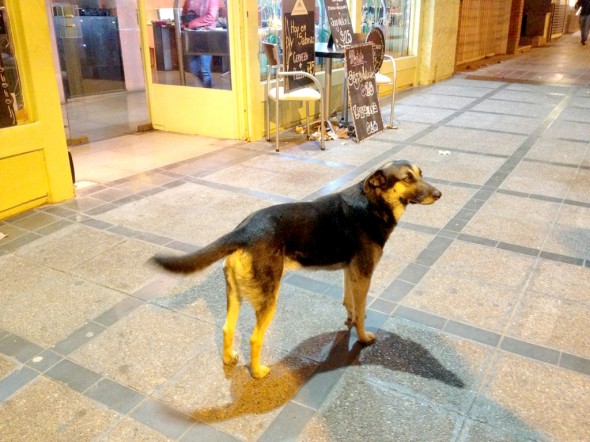 The mother said she had never seen the assailant before, but on that day he stopped by the house and asked if he could take the family dog with him. It appeared the man knew the mother did not want to keep the dog anymore. Willingly, the mother handed the man her loyal pet, but minutes later the man came back to return the dog. It was at the moment the rapist came across the two young girls.

The children where walking towards a corner store and when the man saw them. He abandoned the dog, hid, and waited for the girls. The man then jumped out, grabbed the girls and took them to a semi-secluded area where he started to abuse the nine-year old.

The older child screamed for help. Her actions enraged the assailant and he pushed her aside to abuse the younger girl instead.

What the rapist didn’t know was that the canine he had abandoned had followed him and his young owners to the criminal site.

When the four-legged hero saw the three-year-old being fondled, the brave dog jumped into action and bit the sexual abuser several times on one of his legs. The man had no choice but to leave the girls alone and run away.

Soon, nearby locals who had heard the girls’ screams came to the rescue and called the police.

The rapist is still at large but if it wasn’t for the heroic dog, the criminal would have gotten his way with the young children.

We hope the girls’ mother rethinks her decision to get rid of her pet. The dog is a hero and he should be given the same unconditional love he showed his young owners.