Layla had been on death row scheduled for humane euthanasia on Tuesday afternoon at the Brooklyn facility of Animal Care Centers of New York City. It didn’t matter that Layla wasn’t an affectionate snugly pup, and it wasn’t that all adoption care centers aren’t constantly promoting adoptions; it’s that no one came to rescue this dog. The shelter suggested Layla had special needs. How would Layla know? Who could be sure, but she would never let go of the only thing she had left in this world – her stuffy. She carried the toy down the street and through the yard; it made her feel safe. 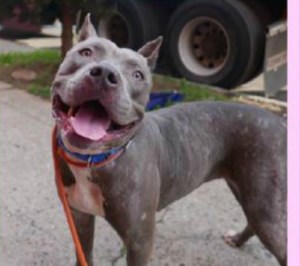 Once upon a time, Layla played with five young children –  the little ones aged two and seven were her favorites; she followed them everywhere. Barely out of “puppyhood,” Layla needed time to unwind along with patience and love in order to become a model canine citizen. Barely a year old, the dog had been surrendered to the shelter because the family had too many pets. Because she had been the last one brought into the home, she had been the first one booted out. In addition, she was never taught the guidance and socialization skills necessary for a young dog to learn, and when Animal Care Centers of New York City recommended the dog be listed as “rescue only,” Layla’s chances to find a home were greatly diminished.

Although Layla’s plight seemed hopeless, animal advocates would have no part of giving up. All day, the puppy’s story garnered social media attention; all day messages flooded into the Pet Rescue Report’s email box begging for information wanting to know if Layla had been adopted.

Please honor your pledges at donate@rescuedogsrocknyc.org”

Stop by the organization’s Facebook page and thank them for helping Layla; guaranteed to make your heart smile.