It was a disturbing discovery in Vallejo, California for a woman walking her dog near an embankment off Columbus Parkway. A local resident, Carine Peters had been walking her German shepherds away from Blue Rock Springs Park when her dogs nosed their way into the nearby bushes. That’s when Carine spotted three black plastic garbage bags – dogs stuffed inside of them and a few dead bodies lying nearby.

According to Fox News, the bodies of the dogs had been deteriorating, but Carine was able to identify their breeds and stated there were between 10 and 12 dogs – some looked like Labrador retrievers, poodles, spaniels, and all seemed to have been well-groomed. None of the bodies wore any collars or had identification tags.

“These animals lost their lives to something sick and depraved. I don’t know what happened. Were they bait dogs for fighting? Is there some individual out here that is killing dogs?, stated Carine who found the dogs in mid-February.  Of course I want a full-blown homicide investigation; they say there’s nothing to test, or to look at. In my mind there is.” 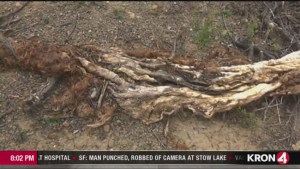 Even though she reported the grisly scene, it took a long time for Animal Control officers to arrive at the spot, and by then the weather and coyotes had caused most of the evidence of lost lives to disappear. The Vallejo Police Department and Animal Control have refused to investigate.   What Carine did find, however were two poles found near the dogs’ bodies. One of the poles had a box cutter blade attached to it.

Was that used to kill the dogs, Carine wondered? The other pole had a scissors type head to it; black fur and plastic still entangled.

The Center of Animal Rescue and Education of Solano County has stepped up to help; believing the dogs were once someone’s pets. The organization is offering a $2,000 reward for information leading to the arrest and conviction of the responsible person(s) involved in this heinous deed.