A photo posted to social media outlets on Sunday is quickly going viral, and it isn’t difficult to see why. A woman by the name of Judy Dechert Rose was shopping at a Lowes in Abilene, Texas when she saw one of the workers there with his service dog. Once she found out about his story, she just had to share, and boy are we glad she did. 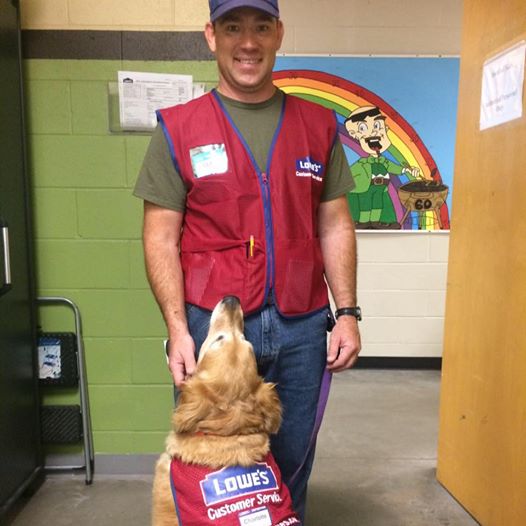 The photo came with the following caption:

“This is a retired vet who struggled to get a job because he needs his service dog! Lowes hired them BOTH!!” 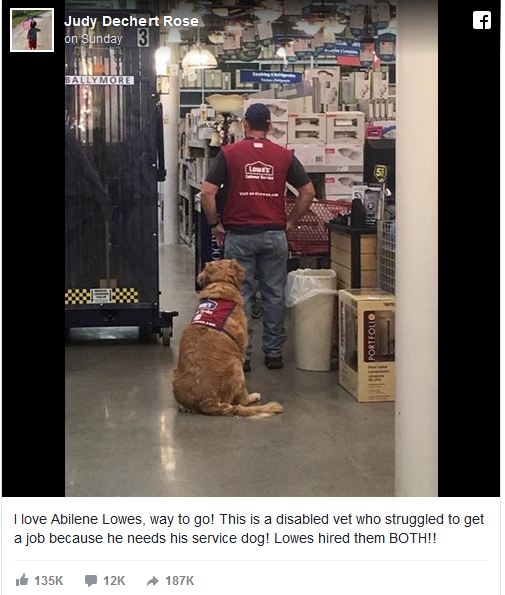 That’s right.  The man, Clay Luthy, and his dog Charlotte, were having a rough go of things.  The military veteran needs his service dog, and this made finding acceptable work very difficult for him.  According to human resources manager Jay Fellers, they didn’t know at first how hard it had been for Luthy to find work.

“We didn’t realize he was having a difficult time finding a job,” said Fellers.  “He applied here and went through a normal interview process, and brought Charlotte in as part of the interview.  He told us about Charlotte, and how she supports him.  He ended up being our top candidate.”

Apparently, some of the other potential employers were concerned that the service dog would become some sort of issue at some point.  However, the folks at Lowes have found things to be quite the opposite.  Charlotte hasn’t been a distraction or a problem at all, and Luthy is very good at his job, which is really all that matters.

“If someone is a good worker, it shouldn’t matter if they have a service dog.  But in our case, it’s been an absolute benefit to have Charlotte around,” said Fellers.  “She’s a great hit with the folks who come around our store, especially the kids.  Our customers really love and appreciate her.  It’s been a good time having them as part of our staff.”

This is not at all the first time that Lowes has been in the news for something like this.  Hopefully, it’s a trend there that continues, and many other places will adopt the practice as well.