It’s gut-wrenching to know that there are so many dogs in shelters that are still waiting for their forever homes. So we’re pretty much a mess after watching a video of a senior shelter dog alone in his kennel. What’s even more heartbreaking is that it seems like no one in the shelter is paying him any attention. 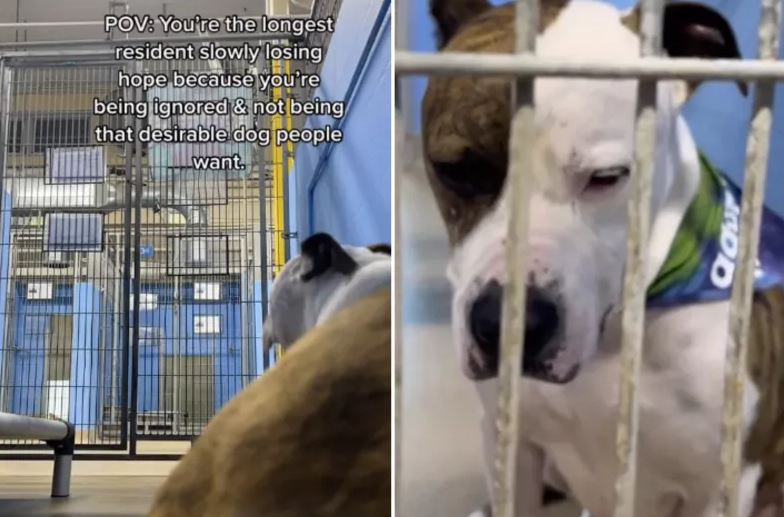 The devastating video was shared by photographer Albert Harris (@aharrisphoto), who must’ve been so horrified to see what happened to Sarge. “POV: You’re the longest resident slowly losing hope because you’re being ignored and not being that desirable dog people want,” the video’s text overlay reads. We can’t even imagine how horrible that must be. Sage is clearly a friendly and happy dog, so we can’t stand that he hasn’t been adopted yet.

@aharrisphoto Imagine being in a kennel with no to little interaction. This is the case for Sarge. Let’s get him a home. #adoptdontshop #animalshelter #shelterdog #dogtok ♬ original sound – sweetsaudioz

On Thursday, Harris shared a video of older pup Sarge—aka “Five Star General.” Approximately 7 years old, he has been in the shelter since July 3 and is their longest-serving resident.

In the heartbreaking video that has captured hearts online, Sarge is seen in his kennel and the text overlay reads: “POV: You’re the longest resident slowly losing hope because you’re being ignored and not being that desirable dog people want.”

Harris told Newsweek: “Sarge is our longest resident at over 70 days. A year ago, our average animal was struggling to get adopted at 150-200 days. [With] TikTok and Instagram reels [we] have truly been pushing our hardest to adopt animals out to families that care.”

Meanwhile, another reply said: “No dog deserves this.”

“While it is not a perfect platform, it is a tool to show our community we care about our animals,” explained Harris discussing the social media videos he creates. “Our responses have been awesome. However, the video does go to a broad audience all over the world. It was worked in our favor so far, getting every animal we have featured adopted.”

Just weeks after National Dog Day, Sarge’s story has captured hearts and the video now has over 703,000 likes and more than 7,000 comments.

One TikTok user wrote: “I pray this angel finds a home. They’re all so deserving,” while another viewer said: “Oh sweet Sarge! Rooting for you buddy.”