“It’s like that feeling you get right before a roller coaster ride,” he said. “Butterflies, anticipation, sick,” Chelan County Sheriff’s Deputy Mike Lamon told KOMOnews.com as he waited eagerly at Seattle’s Sea-Tac Airport.

It’s not an uncommon feeling when awaiting the arrival of a long lost friend, someone you’d come to love, but hadn’t seen in six long years. 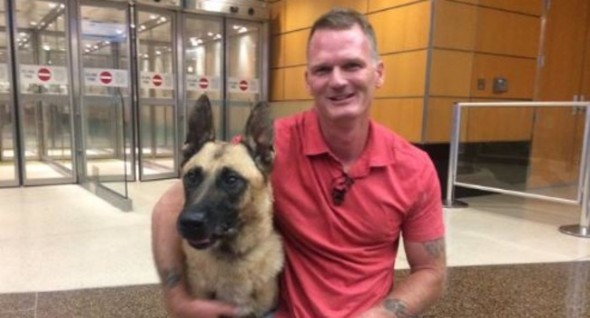 In this case, that “someone” was Adam, the Belgian malinois with whom Lamon served in Afghanistan. He was the bomb-sniffing dog’s first handler and Adam was his first war-zone charge. The pair worked at entry and exit points on a U.S. military base and were together constantly for nine straight months. Then Lamon had to return to work back home in the States.

“I’ve been trying to find him for the past six years, if just by chance I could get him when he retires,” said Lamon.

Mission K9 Rescue, along with a $150,000 grant from the Petco Foundation to the U.S. War Dogs Assocation, was able to make that dream happen.

Mission K9 Rescue helps bring war dogs back to live with their handlers.

“He called me and sent me some pictures and videos and, lo and behold, Mission K9 said he’s mine if I want him,” said Lamon. It was a no-brainer. The answer was a resounding yes!

“The whole environment that we were in together, I think that plays a huge role in it,” he said. “That bond that it creates in that kind of environment, it’s ridiculous.”

Mission K9 helped fly Adam to Seattle and his new home with Lamon.

“I actually found his collar from Afghanistan that he wore, it was buried in all my stuff from over there,” said Lamon. “So he gets his old collar back.”

Ahead of the reunion, there was much anticipation

“There he is.” Lamon said, trying to hold back tears as he saw Adam coming through the gate. The dog heard his name and ran straight into Lamon’s arms.

Adam is retired now. The only thing he’ll have to worry about finding from here on out, says Lamon, is tennis balls.