When Kate Griffin was 14, her parents divorced and it was decided that the family pup, a cock-a-poo named Cami, would be given away to a new home where things would be more stable.

Griffin and her sister were, of course, heartbroken. And she thought she would never see her dog again, but she was wrong. 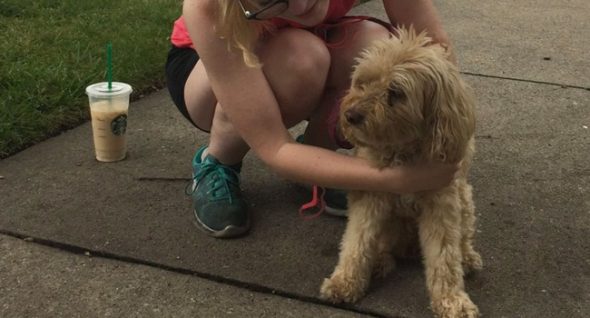 She told her touching story on the Facebook page Dogspotting and the tale caught fire.

“I was walking back from picking up my Starbucks and I saw these two dogs across the street. One was a bigger black shaggy dog looked like a German shepherd mix and then there was the smaller caramel-colored one,” Griffin told New York magazine, which reached out after her post went viral.

“I instantly started looking at her.”

Griffin wondered if the dog was Cami as she did the math. Her former dog would be almost 15.

“I debated back in forth in my head if I should cross the street,” she said. “I just decided, hell, I’m doing it.” 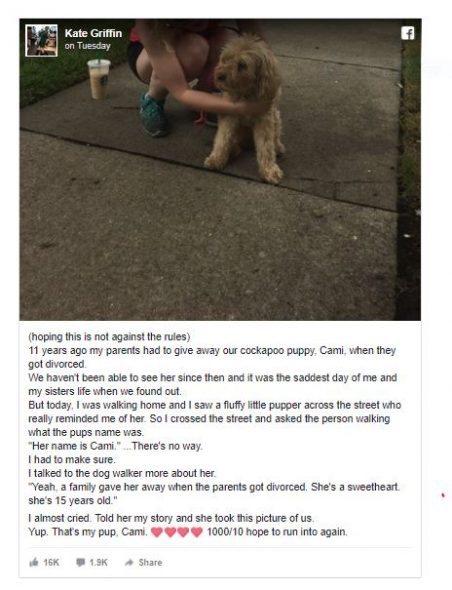 She approached the woman and remarked that the dogs were cute, asking their names. The larger dog was Riley. The little one?

“I froze. I just said, ‘Oh my god, I think that’s my dog. I think this is my dog,’” Griffin said. “The walker looked at me kind of confused and said, ‘She’s 15, she’s a sweetheart, a family got them from another family who had to give her away.’ And I just said ‘My family had to give away my puppy. This is her.’”

Cami, she was told, was not generally so forthcoming with strangers, but the dog seemed to know Griffin. She approached her. She licked her face.

“She looked right at me,” Griffin said, “and I almost lost it. I had to keep myself together and just tried to stay in the moment to be happy about seeing her and not sad about how long it had been.”

She comemmorated the event with a quick photo, too.

Don’t lie, readers. Like us, you’re probably reaching for a tissue right now.

“I’m just happy I got to see her one last time,” she said, filling our hearts, if only briefly, with the hope that one day we too may enjoy one last interaction with the Cami of our past.