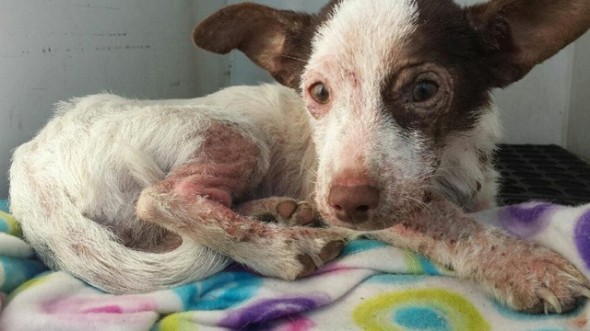 On November 25, 2014, Karen Herrera from Fontana, Calif., found a white and brown female dog inside a garbage bag tossed on the side of the road. The dog had endured abuse at the hands of her owner prior to getting discarded with the garbage. The dog’s body had multiple bite wounds and patches of missing fur, yet, she had somehow survived the unimaginable and patiently waited on the side of the road for a helping hand. 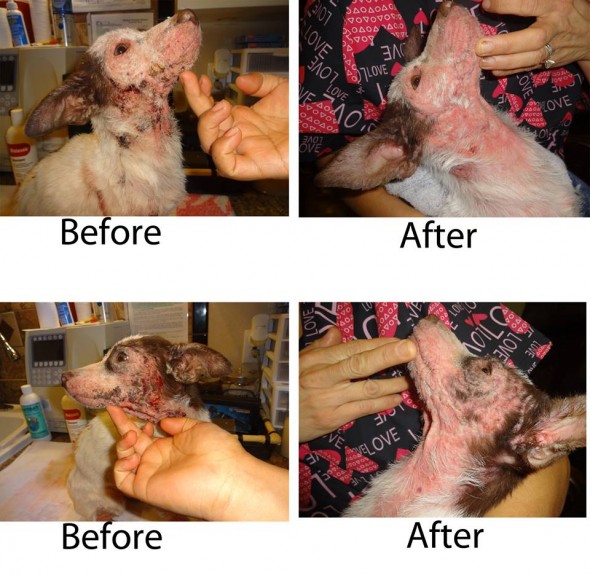 According to a news release from the Fontana Police Department, Herrera was on an early morning walk when she encountered the injured dog.

“She was there inside the bag. She was scared and cold,” said Herrera. “I patted her on the back of her spine and she started bleeding.”

The Good Samaritan contacted police and waited for officers to come get the injured dog.

The dog has been named Gladys, and authority rushed her to General Dog and Cat Hospital in San Bernardino where she was treated for her injuries. Veterinarians determined she suffers from mange and believe the bite wounds were inflicted because she was probably used as a bait dog while training other larger and stronger dogs fro dog fighting.

Authorities do not know who Gladys’s abusers are, but there is an open investigation and they hope to capture the dog’s abusers.

Glady’s is now recovering at Sunshine Haven Animal Rescue and Rehabilitation and her health has improved significantly. Her mange is clearing up, her bite wounds are healing and she is getting along well with the other dog’s at the center.