A woman from Memphis is going to be spending the next two years behind bars for neglect. She left her dog in her car and went shopping, and while away, the dog had died.

Alexis Cain was convicted on charges of aggravated cruelty to animals. The puppy she let die in her hot vehicle was only three months old.

According to investigators, Cain left the dog in her car in the parking lot of the Wolfchase Galleria this past July to go shopping. The temperature outside at the time was 99 degrees.

Shoppers saw the dog in the car, and called police. After arriving on scene, the police did manage to get the dog out of the car, but after being taken to the Humane Society of Memphis and Shelby County, the dog died.

“They recorded the dog’s internal temperature as 110 degrees, which is the most their thermometer would go,” said Katie Pemberton of the Humane Society of Memphis and Shelby County. “This two-year sentence is not the norm based on what we’ve seen. But we believe it should be the norm.”

Local defense attorney Lorda McClusky said that there are a number of factors that will determine someone’s punishment when it comes to these cases. 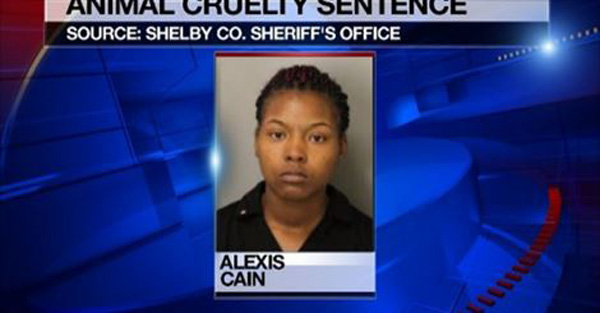 “There’s ranges,” said McClusky. “It depends on the history of the individual. What you get charged with depends on the facts and circumstances. I can’t say it’s abnormal, because it’s in the range of punishment allowed by law. Is it unusual? I think it may be something that we haven’t seen so often in the past.”

State law says a class E felony comes with one to six years in jail. Animal cruelty cases go up to a class E felony from a class A misdemeanor, especially if the defendant has had prior offenses. According to a records check, Cain has no such offenses on record.

Pemberton believes that the length of the prison term is something positive. She believes that this is a sign that the court system is going to start to hold animal abusers more accountable.

“There are a lot of citizens out there that support tougher penalties and we want to see this stuff taken seriously, and in this case it was,” said Pemberton. “We need to educate people that when it’s above 70 degrees it is not safe to leave an animal or a person in the car.”