“Beauty is in the eye of the beholder” – Margaret Hungerford. It’s the perfect quote for this story. This poor pup named Bonnie was found in Romania. She was laying wounded next to a railway track. Vets guessed that she was run over by a train, but also mentioned that these horrible wounds could have been caused by an even more horrible human being.

Bonnie is missing a nose and her front paw. Vets didn’t think she would survive and were ready to give up. But after they transferred her to the UK, Bonnie was noticed by an amazing woman named Kate. Kate immediately fell in love with her and after fostering Bonnie, decided to give her a forever home.

This is Bonnie. She was found in Romania and was about to be put down because of her deformity and wounds

“Bonnie was born in a huge factory in Romania, surrounded by other street dogs. A lady working there had seen a puppy, her mum, and siblings before Bon was injured, had taken pictures to put on social media to try to find them a home. Bonnie was hit by a coal train, smaller than usual trains. Workers saw her being hit, heard her cries. 3 days later, when the kind lady returned to work she found Bonnie injured. The lady and her daughter Claudia took the puppy, mum, and siblings to safety. Took her to the vets. Claudia said. ‘she smelt like death. We had to open the windows on the drive to the vet.’ No nose, missing half her leg and tail. Lots of operations to ‘fix her up.’”

Bonnie was found on a railway track, wounded and very ill. Her nose and front paw were missing 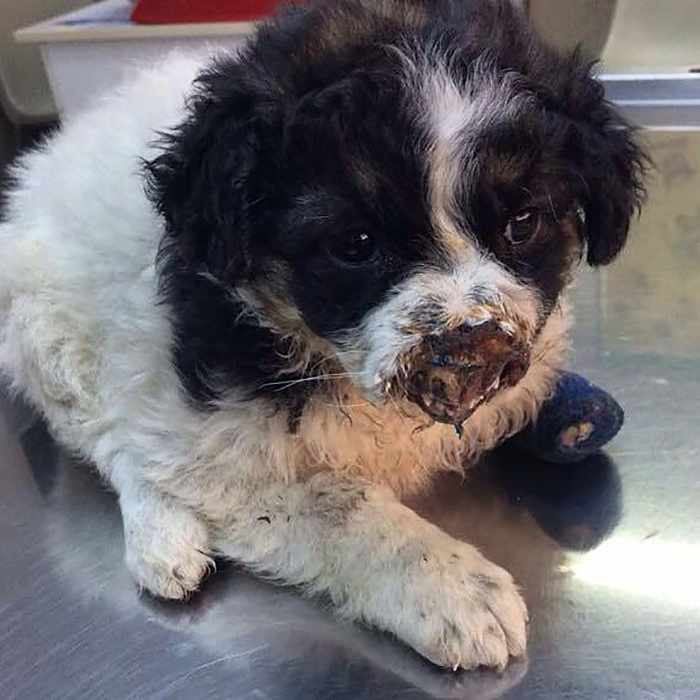 Bonnie was then brought to the UK by Beacon Animal Rescue Centre. That’s when Kate saw her on Facebook 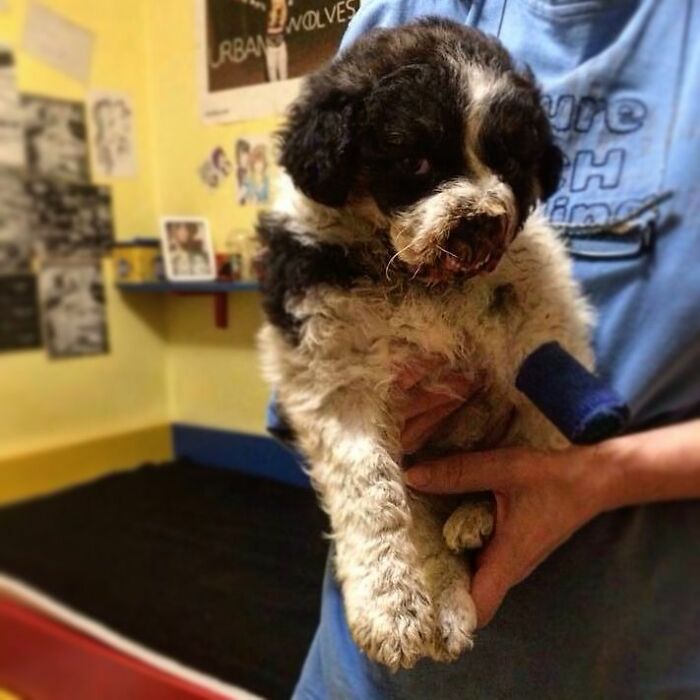 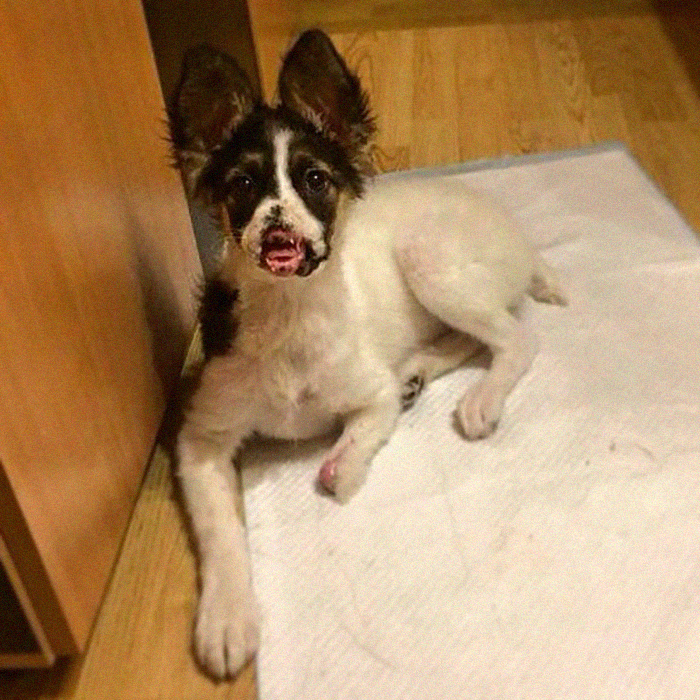 “Bonnie was bullied by her siblings because she’s different and weaker. The kind lady and her daughter that found her loved Bonnie, but they couldn’t keep her. They took her to the rescue (Beacon Animal Rescue). I discovered her and the owner of the rescue, Rebecca, showed me, ‘we just found this poor baby.’ I fell in love, knew no one would want her because of how she looked, and people would think she would need specialist and ongoing medical treatment which would put them off.”

It was love at first sight. In a couple of months, Kate adopted Bonnie and gave her a forever home 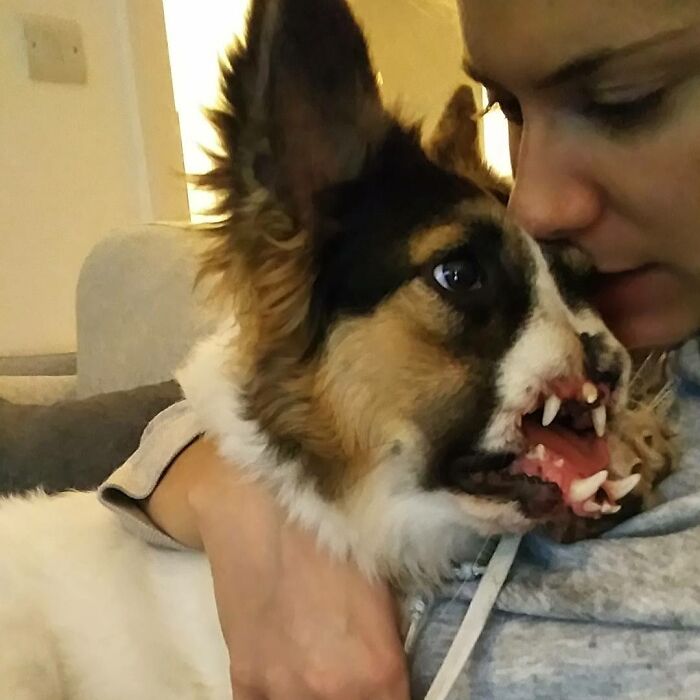 “Bonnie came to England with her sister Effie (who lives about 20 minutes away). Moved into a big old private school to live with me, my husband Ross, and her new siblings, Pepper, Baxter, and Bella. Bon’s mum and siblings were adopted in Germany. We changed the name from Angel to Bonnie, because she’s too cheeky/bossy to be called Angel.”

At first, Kate and her husband were raising money for Bonnie to get a prosthetic leg and surgery for her nose 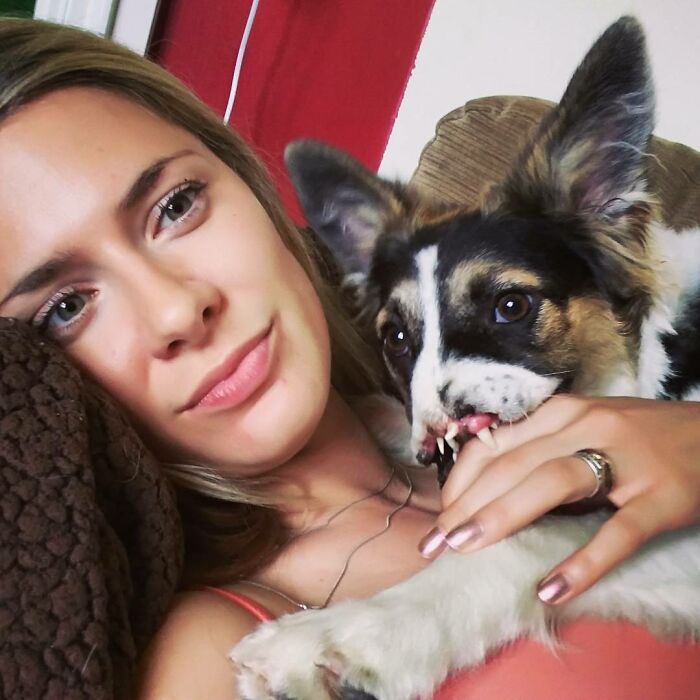 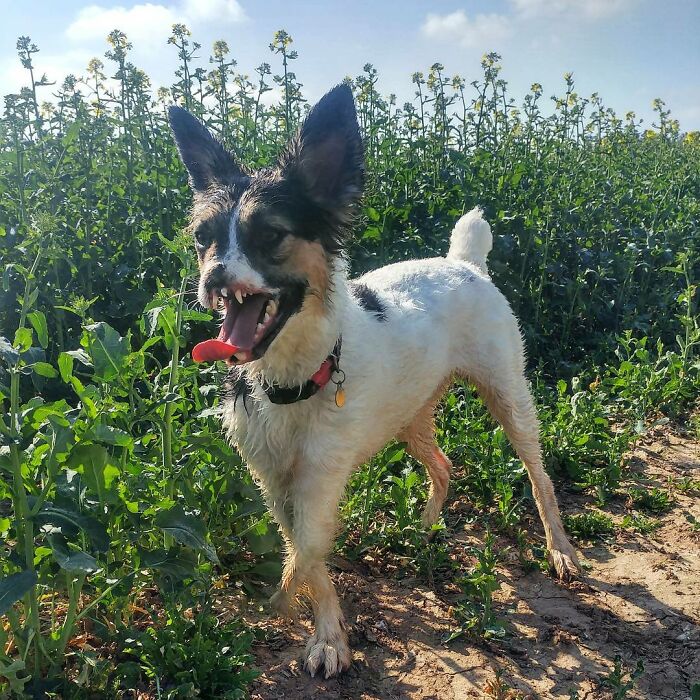 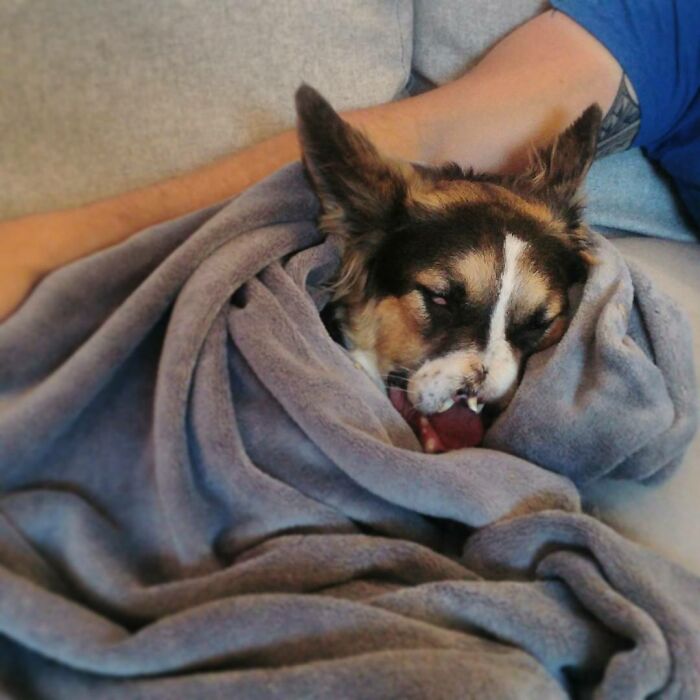 “The children in school have never seen anything like the puppy before—they come from a variety of cultures, some that see dogs very differently, but Bonnie was a good educational tool—taught acceptance of differences and not to judge a book by the cover”

However, the prosthetic leg didn’t work. The wound kept opening up because of it and vets strongly advised against it

“Then a new rescue sibling Skyla joined the family. Not many dogs liked Bonnie because she looked different, but Skye automatically loved her, and just wanted to play—same age—grown up together. Bonnie loves to play with her sister Skye—as quick as all the other dogs—having 3 legs makes no difference at all to her.”

After some more deliberation, Kate decided Bonnie doesn’t need cosmetic surgery either, because she is perfect the way she is 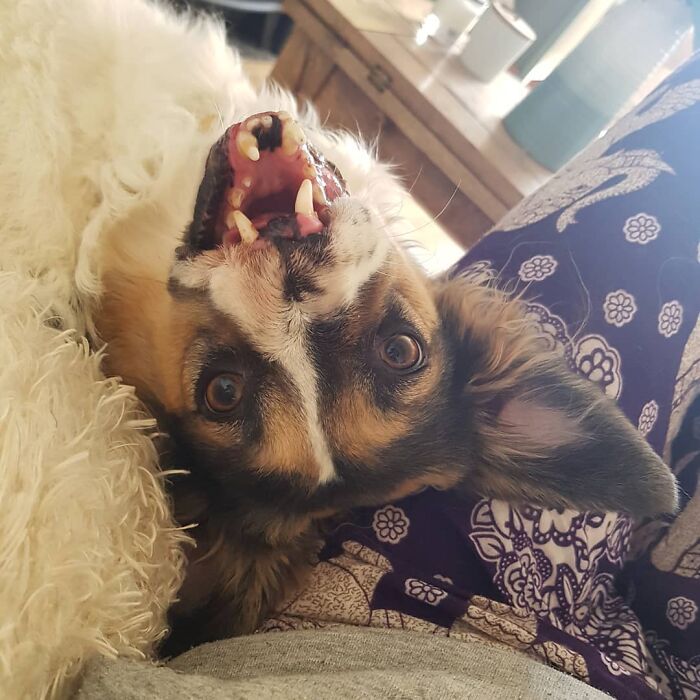 “Then we raised money for a prosthetic leg, but Bonnie’s stump wound kept opening up (Bon used to scream and scream). The vets advised it would be better for Bon to amputate—wish we had done it sooner, she is now pain-free and very agile. We decided not to change her nose because it’s purely cosmetic, we love her how she is. If someone doesn’t like how she looks, who cares, just shows what shallow idiots they are!” 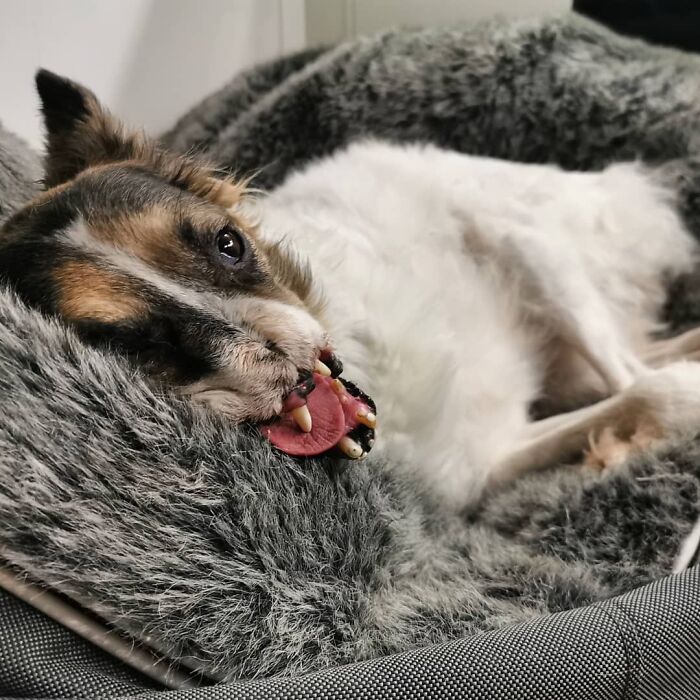 “Here are a few problems we run into with her: Only occasionally, if food gets stuck, we have to give her lots of pats on the back—just need to monitor her, really. Bonnie doesn’t feel any pain—has phantom leg syndrome—so you can see her trying to move her leg, even though it isn’t there, but it doesn’t cause her any pain.” 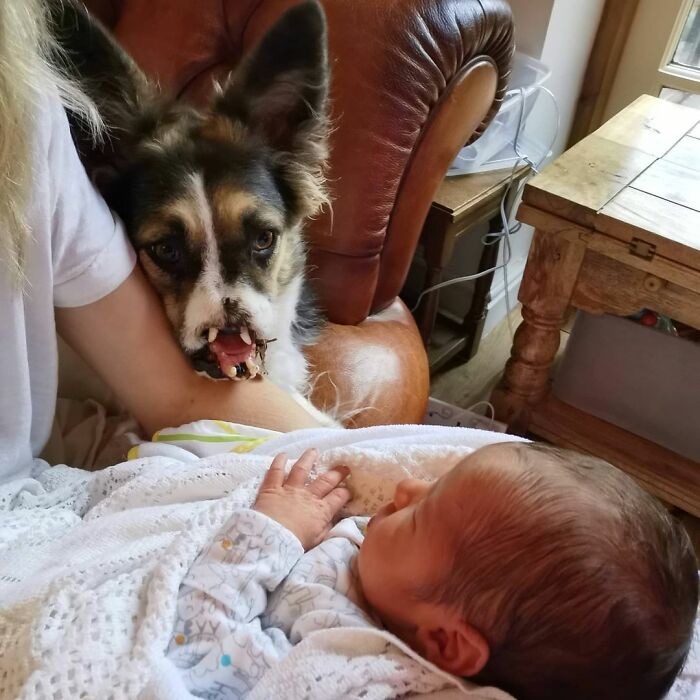 “People often ask how she eats—fine—just with a deep bowl that she scoops up with her bottom teeth. Not that long ago Bonnie ate magic mushrooms on a walk and almost died, but fought it and won—again.

She feels no pain on the mouth also—she’s just a bit slower at eating and drinking—but she has adapted. Her hearing is incredible, and she is so clever, she watches (and barks at) anything that resembles an animal on the TV, to the point where we can’t watch animal documentaries with her anymore!”

Bonnie is an amazing, snuggly, and energetic dog. She doesn’t feel any pain and does what any other dog can 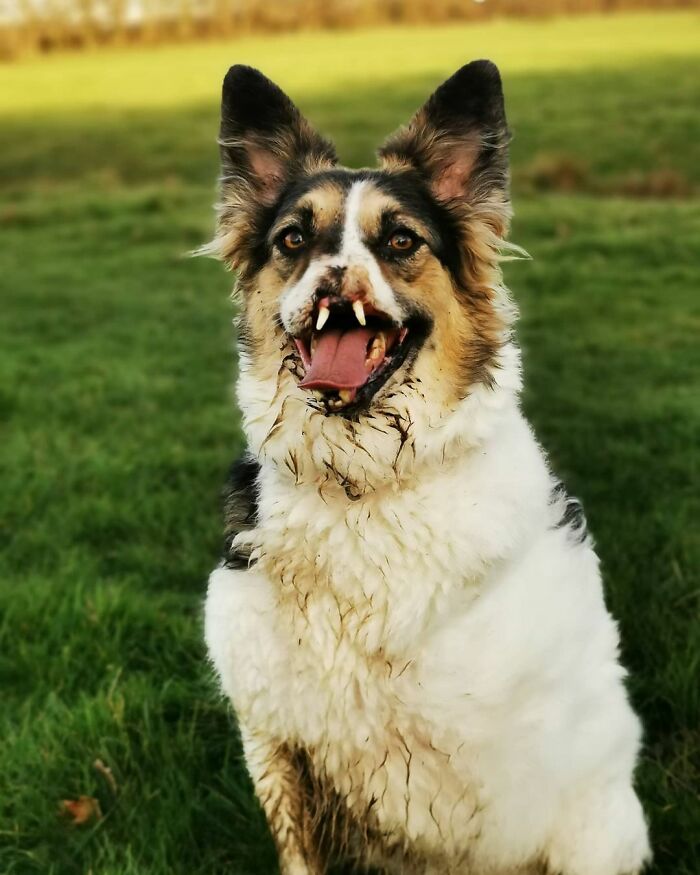 “People’s responses to Bonnie—staring. They say things like: ‘Get that thing away from me,’ ‘your dog is ugly,’ people even tried to kick her. ‘Get your dog away from mine, it’s snarling.’ One of the most common things people say, when I say I have a dog with no nose: ‘but how does she smell?… bloody awful.

But she also gets lots of love, people are inquisitive and want to know what happened. She has been recognized from social media and people have taken selfies with her, loved across the world on social media—following online—overwhelming. People have sent her gifts, and write beautiful messages.”

“Bonnie is the boss of the household, she has had to be strong—that’s how she survived—but it often means she can be a bit grumpy. She loves her mummy—we have a special bond—ever since I picked her up and took her home. I watched her all night the first night she stayed, her breathing was so loud I thought she was going to die… but that was just Bonnie and I soon got used to the noises—she is less noisy now.” 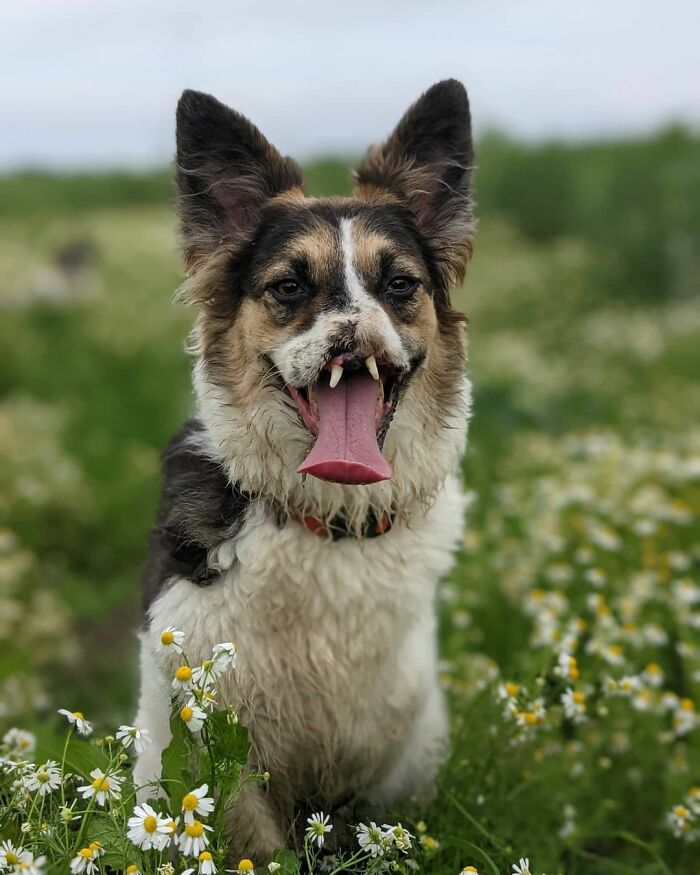 “Please help dogs with ‘disabilities’—people are often put off, but it is so rewarding to know what a difference you’ve made, especially when people said she should have been put down, just want to go back to them and say—look at her now! There are so many dogs with disabilities that need help out there, please think of them—rescues such as @miraclesmission @florisfriends. Adopt, don’t shop!