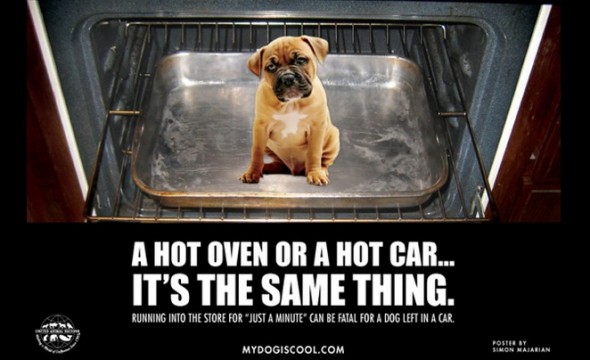 A woman was cited by police for leaving her dog locked up in her car, with windows barely cracked open, while she shopped for over an hour at a local Publix in Clermont, Florida.  An eyewitness reported her to the police that hot Monday afternoon, and not a moment too soon.  It would seem that the more we dog lovers call attention to this, the more state and local governments are starting to listen.

This particular incident took place after a witness noticed the dog in the car while driving past.  She got out and had been with the dog for over 20 minutes when she was informed that employees had seen the dog in the car even earlier than that.  It was almost at the 50 minute mark before police could make the scene.

Upon arrival, the police could see the eyewitness feeding the dog water through the barely opened window of the car.  Not long after the police showed up, the vehicle owner came out of the store to see what was going on.

Police informed her of the dangers of leaving a dog in a vehicle.  Something that most people with common sense already know.  Considering the amount of coverage this topic is getting, it’s hard to imagine anyone not knowing the dangers already.

After a good talking to by law enforcement, the vehicle owner was given an appearance ticket.  She’ll have to go before a judge, and faces potential misdemeanor charges and violations as well.  Let’s hope that more people see just how deadly and dangerous this practice is.  Also, the louder we dog lovers are about getting the laws either created or changed, the quicker it can happen.  This writer dreams of the day he doesn’t come across 3,000 stories a summer involving death and/or near death because someone left their dog in the car when it was too hot.