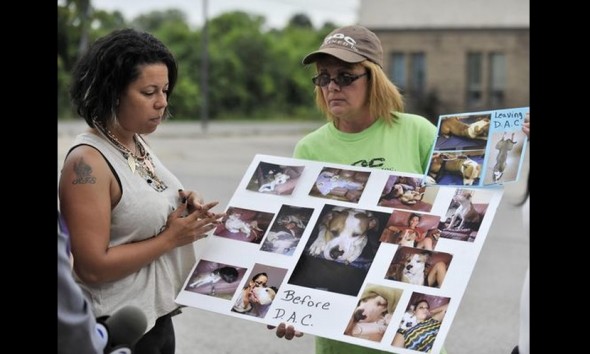 Detroit Animal Control (DAC) promised that Major would be in good hands, stating after a short quarantine he’d be returned to his home safe and sound.  That was very far from what happened.  It was discovered that Major was kept in horrific conditions, which likely caused the medical complications he was suffering from.

Steward says Major was confined to a cage that was far too small for a dog his size, given a dry bowl with no water, and forced to sit in his own urine and feces.

According to Melissa Miller of Dog Aide, “We do believe Major did suffer unnecessary neglect at the hands of Detroit animal control.”

Steward says that the dog’s health rapidly deteriorated while stuck at the DAC.  She believes that Major’s death was 100% preventable, and 100% the fault of the DAC.

Apparently, the vet at the DAC wasn’t very interested in helping major out at all.  Steward was forced to find proper medical treatment, but it was too late.