In 2014 Alicia, her family and their Shih Tzu named Corey were living in Texas. One day the curious pet found a way out of his yard and got lost. The pet owners searched for him but never found him and believing they would never see him again, the family moved thousands of miles away to Maryland. However, after being lost for over a year Corey was found. 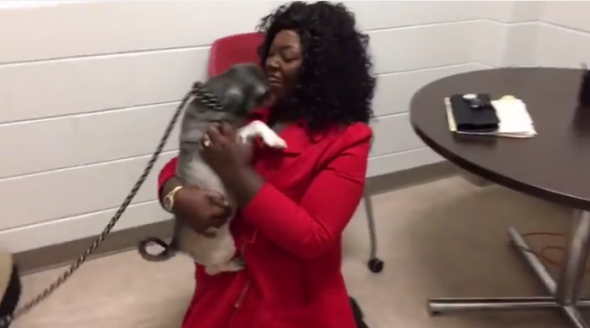 The news came to the family unexpectedly. In January 2016, Montgomery County Animal Services and Adoption Center (MCASAC) picked up the dog as a stray and after scanning him for a microchip, one was found. Thanks to it, MCASAC contacted Alicia via email to let her know her dog was alive and well.

As soon as the pet owners learned the good news they made plans to reunite with the dog. On February 1, 2016, Alicia flew back to Texas and embraced her beloved pooch.

In a video posted on YouTube, the pet owner says there were tears of joy when the family learned Corey was alive. New pet clothes and even a celebratory cake were bought for the happy reunion.

Even though Corey spent months away from his loved ones, the bond between him and his owners is still intact.