When an elderly woman moved to a nursing home, she wasn’t allowed to bring her companion, Pepper, and had to surrender her to a shelter. But she was adopted by a wonderful family, and her new mom wanted to let the woman know that Pepper was doing fine, and just how much she means to her at this crucial time in her life… 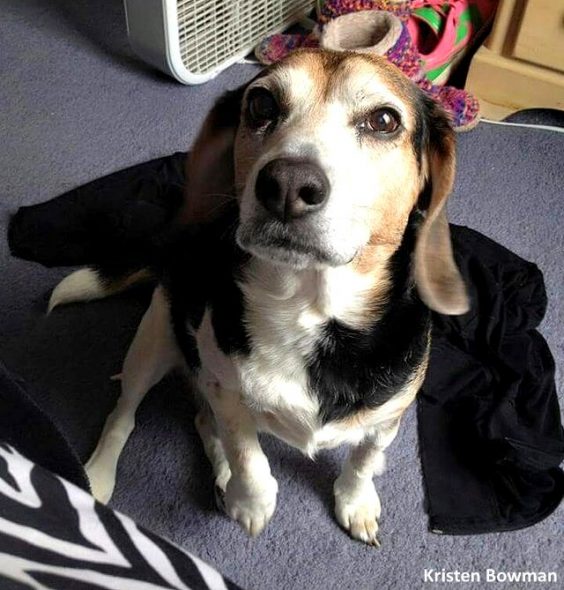 Pepper spent the last six years being doted on with her mom, but a few months ago, the lady was no longer able to live unassisted, and went to live in a senior home where pets aren’t allowed.  She couldn’t find someone to take her dog, and though it broke her heart, she was forced to take her to BARCS, the Baltimore Animal Rescue & Care Shelter.

“While surrendering Pepper, she described her to our intake staff as ‘the most beautiful, loving, friendly, spoiled rotten dog with great long ears,’” they wrote on Facebook. “She trusted our staff to find Pepper a new home filled with love.”

A new home was waiting for her, unbeknownst to anyone at the time.  The Bowman family was grieving from the loss of their cherished dog Charlie, who had been with his mom, Terrie, for nearly 15 years.  He was the product of a puppy mill, and was very sickly when he was a baby.  It took many months, but Terrie nursed him back to fair health. 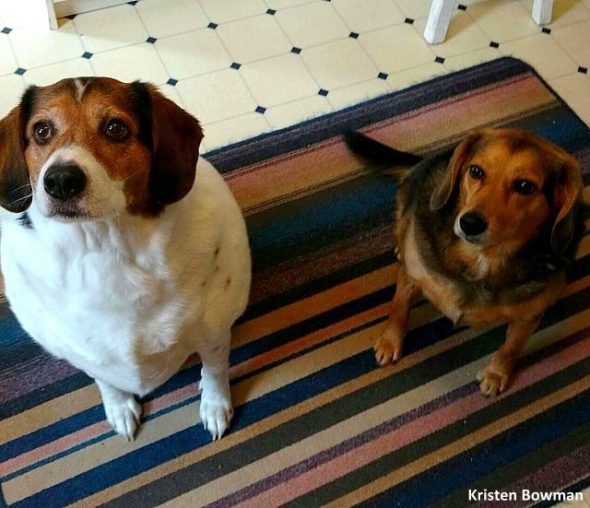 “After that ordeal, Charlie had a very special place in my mom’s heart,” daughter Kristen Bowman told The Dodo.

Though Charlie was never in perfect health, he lived a long and happy life with his little doggie sister, Gracie.  But in January, his kidneys began failing.  He still seemed content, but one day in March he stopped eating.  Later on in the day he fell to the floor, and as Terrie tenderly held him in her arms, he took his last breaths and closed his eyes forever.

“She held him and cradled him like a baby crying her eyes out,” Kristen said. “Each morning after that day, I saw my mom cry her eyes out continuously. She missed her baby boy so much. A week later he came home and she put his box of ashes right next to her bed where he was close to his mama once again.”

Though the whole family was in mourning, no one took it harder than Terrie.  But even Gracie was deeply saddened.

“She was lost without Charlie and, as she did every morning, she would sit and wait for him to go outside, except he wasn’t there anymore. You could tell she was suffering and knew her big brother was gone forever.” 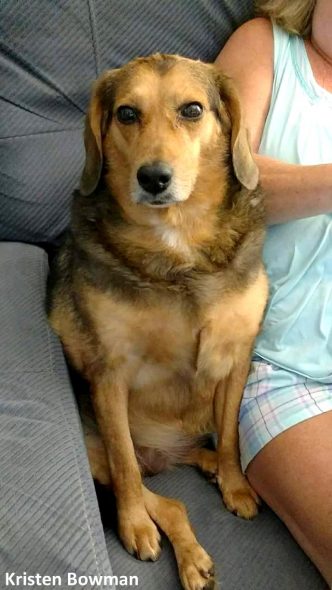 The best way to fill a void in the heart is to love again, so Terrie began looking online for dogs who needed homes.  In May she came across one at BARCS who bore a strong resemblance to her dear Charlie, so on the day before Mother’s Day, Kristen and her boyfriend, his two daughters, and a niece went to check him out.  Even though BARCS had just opened, three other families were already there to put in applications for the dog.

“Then I had remembered seeing a beagle mix on the website, named Pepper, and asked if she was still available,” Kristen recalled. “They said yes, and that no one had put paperwork in to adopt her.” 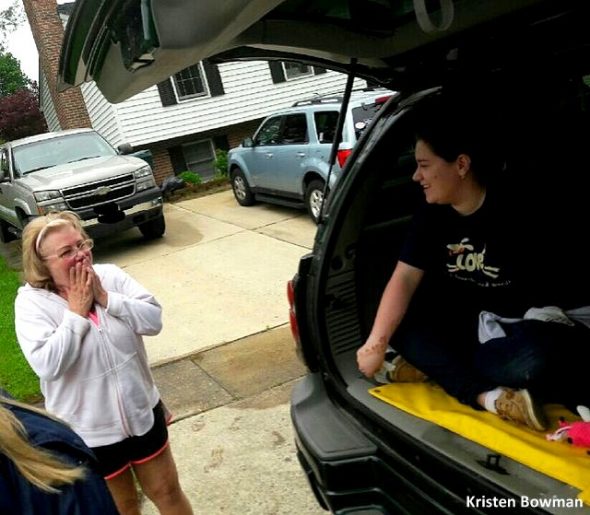 She went to meet Pepper, and the poor girl looked miserable.  Kristen bent down to see her better, and noticed that her face and ears looked remarkably similar to Charlie’s.  Pepper walked over, wagged her tail, and gave Kristen a kiss on the hand.

“I knew right then she was it. I just felt it in my heart.  So we set off for home to surprise my mom.” 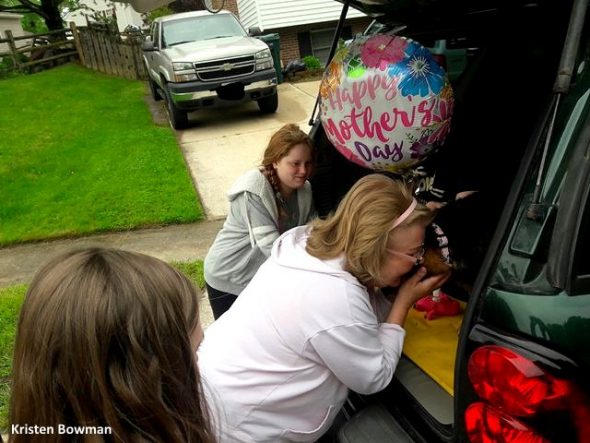 As she filled out paperwork, BARCS staff told her Pepper’s sad story.  This just reaffirmed Kristen’s belief that she was the right dog for her mom.  On the way home, they got Pepper a bath and some supplies.  They also got a Mother’s Day balloon, which they lashed on to Pepper’s new collar.  Once home, they told Terrie to come outside, as there was a surprise waiting for her in the car.

“She immediately kissed Pepper on the forehead and held her face, telling her that she was so pretty and that she loved her,” Kristen explained.  “It was pure joy for my mom.” 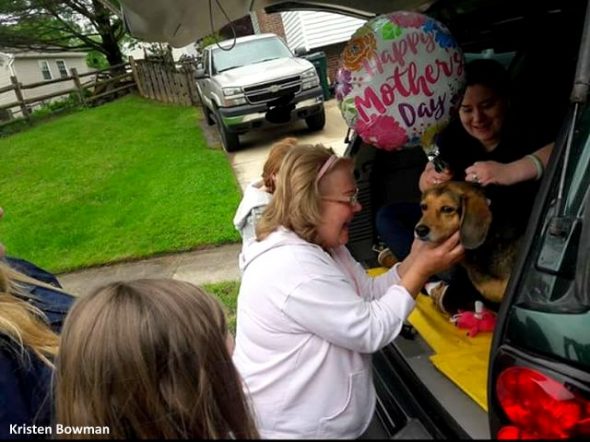 They bonded instantly, and now Pepper has become Terrie’s shadow.  She sits on her lap when they watch TV, and Pepper sleeps beside her in bed.  She is so happy to be someone’s companion again.  Kristen feels they were sent to one another to help the other heal.

So Terrie wanted to let Pepper’s first mom know that.  The family sent the letter to BARCS so they could pass it on to her. 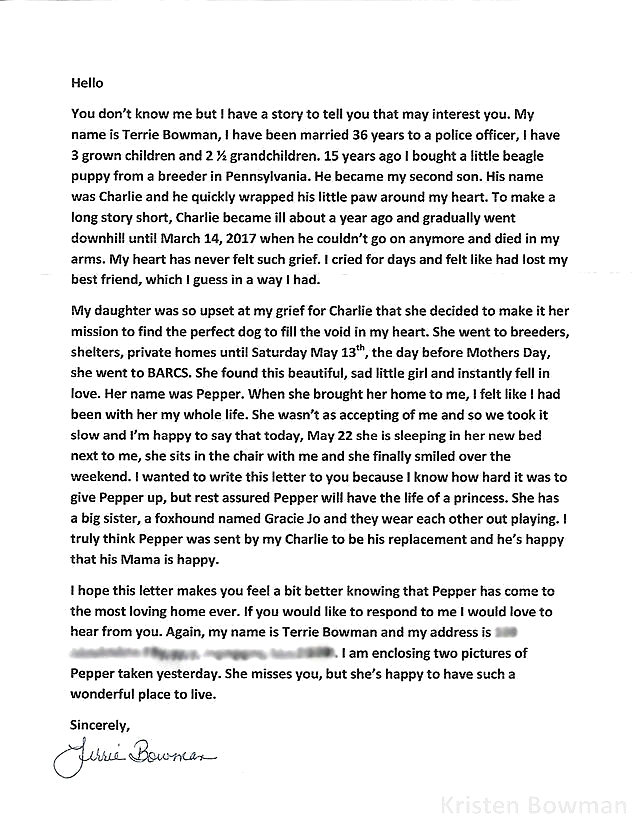 The woman responded, and they are planning to have a Facetime reunion soon.

“And here we are,” Kristen concluded. “I am just happy that I was able to give Pepper a good home and at the same time fix a piece of my mom’s broken heart. I know this won’t take away her pain of losing Charlie, but it is helping her to heal and that means the world to me.  In my heart I truly felt it was meant to be. That Charlie sent her to us.”