Just like a baby attaches to its mother, a dog trained by a man develops a strong love and attachment to its owner. This feeling is reciprocated by the man more often than not. In the event of prolonged absence of the owner, the manner which the dog curls up to its owner, licks him up and runs around him when he comes back, can be seen as an evidence of love, affection and attachment. In human terms, the dog missed its owner so much.

One wonders what will become of the dog in the event of the death of the keeper. Humans react to the death of loved ones in many ways like: rejecting food, crying out their eye balls, wailing and reminiscing. Dogs on the other hand might not be aware of what happened to its owner, thus, not sure whether or not to cry. It displays a different scenario when it sees the corpse or witnesses the burial of its keeper. 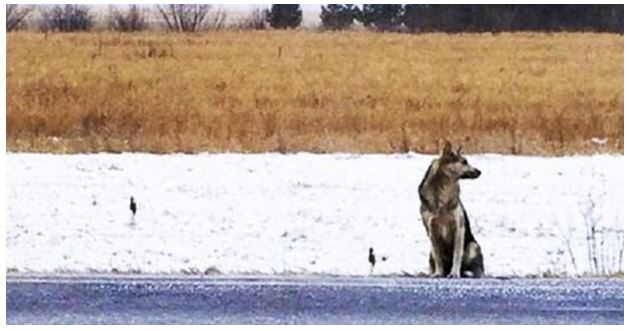 For the former instance, we have a case in hand. In Siberia in 2014, a man died in a fatal accident and the dog kept on waiting by the roadside for the return of its keeper. One can guess and be correct that the dog, if still alive, is still waiting for the return of his best friend. This attachment to its owner also causes the dog to turn down by way of barking, anyone who isn’t its owner or known relative of its keeper. This feature led the dog keeping wake to turn down offers from well meaning citizens and bad ones too, to take care of it. It did so by running away to safety.

All the residents could do was to keep food, bones and water for the dog to ensure its survival. They also built a dog house for it to protect it from the harsh weather conditions and serve as shelter for the dog to pass the night and to rest. A mourning dog is already in a pitiable state, now add stranded to its predicaments, heart breaking!

Just like humans mourn the dead and get stranded because of low budget or loss of money, dogs too can find themselves in those shoes. They deserve love and care; treat a dog right today, you never know which shoe of pain it is putting on.