Quinn is a young teen who has gone through more in his life than anyone should – and he’s proved himself to be a warrior. That’s why, when his mom learned about a special dog named Logan, she knew that her son deserved a companion – one that could understand him better than anyone else.

When Logan was just a baby, his family received heartbreaking news: he had cancer.

Thankfully, the treatments put him in remission… until years later, a new cancer surfaced that was caused by the radiation he’d received when he was so young. 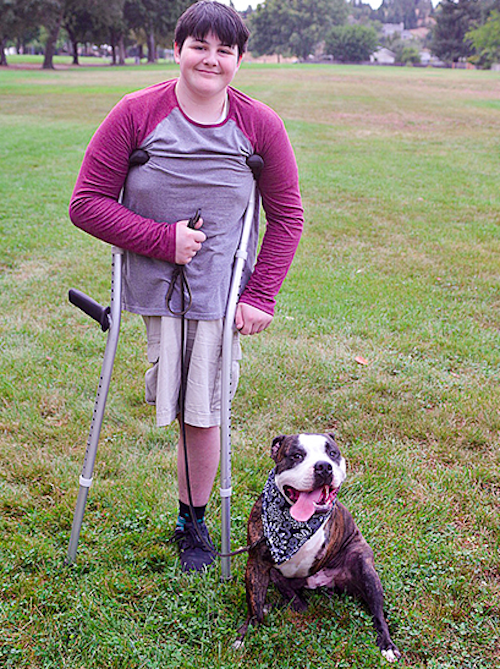 That’s when Quinn, was diagnosed with Osteosarcoma, a type of bone cancer. At the young age of 10, he had to get his hip and leg removed in exchange for his life.

In a story submitted to the Petco Foundation, Quinn’s mom – who never left her son’ side – recalls a specific memory:

“It was the day of his big surgery when he told me he wanted a three-legged dog.”

Thinking it was a spur-of-the-moment request, she didn’t think much of it.

“At the time, I thought he was just being silly. Oh no. He was very serious, and he never let me forget!”

Quinn adjusted to life with a disability over the next two years, but his want for a dog never waned. One day, his mom noticed that a friend had tagged her in a post on a Facebook video, and everything changed.

“As the video about a sweet and playful pit bull named Logan played, my eyes began to water and my heart raced. Logan just had one of his front legs amputated, yet he was bouncing around, playing fetch, and happily greeting children as they walked by.”

Quinn’s mom knew that her brave son and the unstoppable pup were meant to be together.

“I let the clip play over and over as my mind flooded with thoughts of my son. I knew immediately that we had to go get him.” 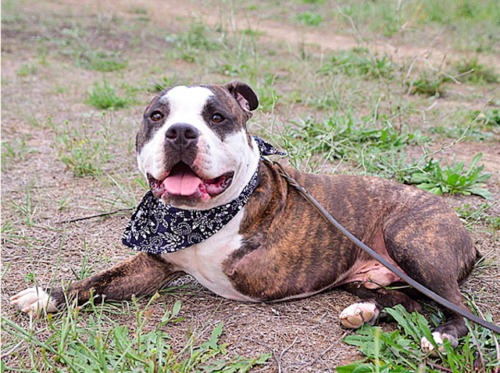 The next day, she picked up Quinn from school early and they headed to the Front Street Animal Shelter to meet Logan in person. It wasn’t long before the deal was sealed.

That dog had so much love to give! He was so perfect for Quinn. Lots of tears were shed that afternoon. Happy tears, of course.

With Logan by his side, Quinn is described as being “more confident and positive,” thanks to the unconditional love and friendship of a companion who’s overcome similar struggles. Quinn’s mom said that her son lived in constant fear that the cancer would come back, but having his new pup around has eased a lot of his anxiety. 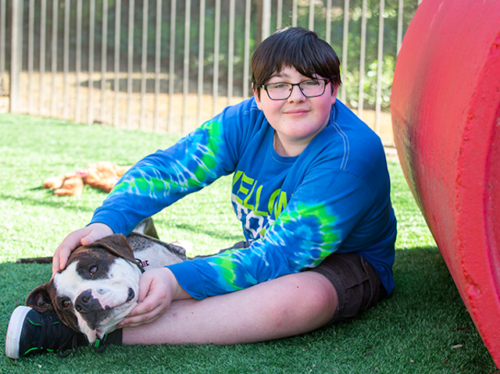 “I think back to that day, and I think in the moment I was trying to give my son something to brighten his days, something that he so very much deserved after everything he had been through,” said the teen’s mom. “Yet, I never could possibly have imagined how having Logan would completely transform him.”

“Going through cancer treatment as a child is an extremely isolating experience, and now Quinn is never alone. Not only does he always have Logan by his side, but he feels as if he has someone who actually knows what he’s experienced and what he continues to face. As he says, ‘Logan just gets me.’” 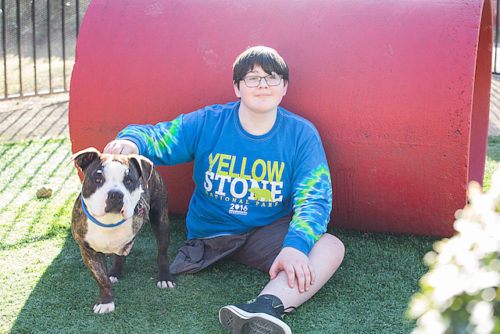 Quinn and Logan’s story is in the running for a special grant from the Petco Foundation. If they win, the Front Street Animal Shelter, where they adopted Logan, will receive $25,000 to help them make more happy endings like this one possible!

To vote for this inspiring story, simply click this link and choose Quinn and Logan’s story, “A Fearless Kid, A Facebook Post, and a Friendship for the Ages.” (Just don’t forget to scroll to the bottom and click “submit” after!) It’s an easy, free way to help more homeless pets, and the families who need them, find each other.