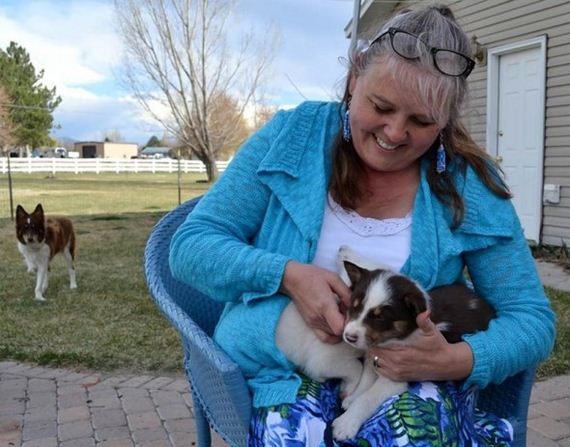 A woman in Eastern Idaho discovered Sis, a brown and white border collie, on the side of a road.  She had been shot, was abandoned and left to die.

To make matters worse, Sis was pregnant When Beth Stenberg came across her.  Now, Sis has a new lease on life and a new family, both human and some pups to care for.  Stenberg says she loves her new family members, and couldn’t be happier.

Stenberg noticed the dog running alongside Interstate 15 between Fort Hall and Blackfoot in Idaho.  She’d seen the dog on her commute several times before.

However, this time something was very different, and very wrong.  The dog wasn’t running along the road this last time.

This time the dog was lying, sprawled and wounded in the grass according to reports.  Stenberg pulled over and saw the dog had been wounded and was in desperate need of help.

Stenberg called police for assistance, and when two highway troopers arrived, Sis was loaded into Stenberg’s car and taken immediately to nearby Bannock Animal Medical Center.

At the animal hospital, Sis was examined by Veterinarian Jamie Rantala.  It was discover that not only did Sis have bullet fragments in her back and shoulders.

To make matters more difficult, it was also discovered that Sis was pregnant.

She must have known that without human help, she and her unborn pups were not going to make it.  Even though she was badly injured and in a great deal of pain, she didn’t protest the help in any way. 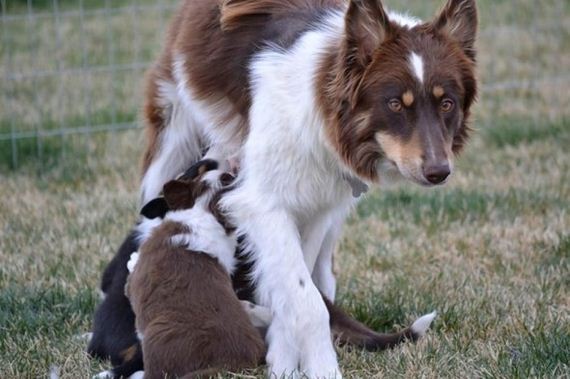 “For the extent of her injuries she never once tried to nip at us,” said Rantala.  She noted the had dog had wounds from a kind of small ammunition, and it took place less than 24 hours earlier.

“She seemed to have an understanding that we were there to help her.  She was a sweetheart from the get-go.”

Despite the harrowing injuries, being pregnant and basically being left to die, she’s now a member of Stenberg’s family.  All of her pups were also delivered alive and healthy.

So now, you can add the manes Sis, Suzie,Sassy, Oden, Chuck, Trip, Dottie, Rogue, Petunia and Valentine to the Stenberg family roll call.

Stenberg and her husband are very happy for their new family, and wouldn’t change things for the world.

Prospective adopters have already began to be lined up for the puppies, but Sis will be remaining with the Stenberg family, unless someone calls to claim her.

“I’ve really fallen in love with her,” said Setnberg.  “She’s part of my family now.” 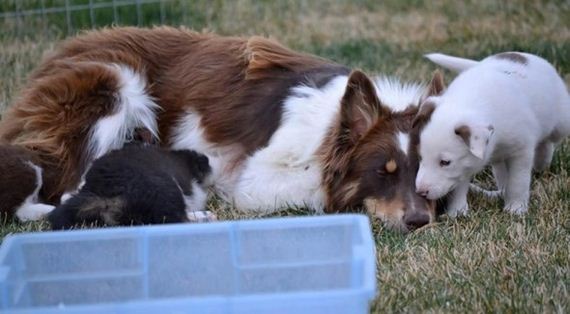